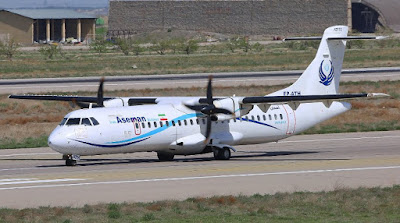 This is in the wake of the crash of ATR72-200 EP-ATS on Sunday, February 18, near Semirom, in southern Iran, which killed all 66 passengers and crew onboard.

The regulator said in a statement last week the measure was precautionary and would allow it to carry out a comprehensive investigation into the causes of the crash.

They are used to run domestic sectors across Iran focussing on connectivity to Tehran Mehrabad and Shiraz.

The airline was established and started operations in 1980.The airline's historic links go back to 1958 to the airline Air Taxi Co., which was rebranded as Pars Air in the 1970s and later Iran Aseman Airlines.

In March 2007, it was owned by Iranian Civil Pension Fund Investment Company and had 298 employees. It has since been privatized.

In July 2016, the CEO of the airline was issued an arrest warrant because of an alleged sum of approximately $37 million in public debts to Iran Airports & Air Navigation Company.

In February 2017, it emerged that Aseman Airlines was in talks with an Irish firm to lease seven Airbus A320neos.

In April 2017, the airline signed a Memorandum of Agreement with Boeing for the purchase of 30 Boeing 737 MAX aircraft with options for another 30 aircraft.

On 4 October 1990, an Iran Aseman Fokker F27 Friendship, registration EP-ANA overran the runway upon landing at Ramsar Airport, and came to rest at a concrete wall 100 metres behind the runway.

There were no fatalities amongst the 46 passengers and four crew members on board, and the aircraft was fully repaired.

The aircraft spiralled into an uncontrolled descent and crashed near Natanz, killing all 59 passengers and seven crew members on board.

On 18 July 2000, Iran Aseman Airlines Flight 775, a Fokker F28 Fellowship, registration EP-PAU en route from Tehran to Ahwaz, was damaged beyond repair when the pilot missed the runway upon a low-visibility landing attempt at Ahwaz Airport and instead touched down next to it.

A successful go-around was executed, and there were no injuries amongst the 84 passengers and four crew members on board.

On 26 August 2010, a Fokker 100 registration EP-ASL operating Iran Aseman Airlines Flight 773 from Tehran to Tabriz overran the runway upon landing at Tabriz International Airport and was substantially damaged when it plunged into a canal.

Two out of the 103 passengers on board were injured, while none of the seven crew members were hurt.

The airplane operated Flight 853 from Mashhad Airport (MHD). The left hand main undercarriage failed to extend or lock prior to landing. A forced landing was carried out on runway 35.

On 18 February 2018, Iran Aseman Airlines Flight 3704, an ATR 72-200, registration EP-ATS flying from Tehran to Yasuj, crashed into the Zagros Mountains, south of Isfahan after it disappeared from radar, 50 minutes after taking off from Mehrabad Airport.

All 59 passengers and six crew were killed.