Cycling The World To Combat HIV/AIDS 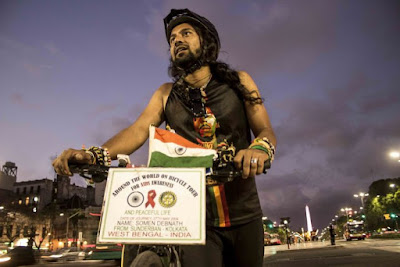 It all started when, Somen Debnath, a 33-year-old of Indian origin, saw an article in a local newspaper titled “AIDS is Deadlier than Cancer”. This triggered an idea, which by 2004 had turned into an epic mission: travel around the world on his bicycle creating awareness about HIV/AIDS.

During his journey he was kidnapped by Taliban in Afghanistan and was held captive for 24 days. He has also been robbed half a dozen times and beaten eight times by skinheads.

Undeterred by occasional setbacks, Debnath plans to complete 191 countries by 2020, before returning build a Global Village in his hometown.

Now, he is in Argentina and biking from Buenos Aires to Comodoro Rivadavia, then after crossing the Strait of Magellan will continue to Ushuaia, the southernmost part of Argentina. After that, Antarctica.

Before he left on this 3,000km leg down Argentina’s coastline, The Indy caught up with Debnath to talk about what he has learned on his mission, where he finds inner strength, and how his cooking skills may have saved his life.

From reading an article titled AIDS is deadlier than Cancer to visiting 126 countries in a bicycle. What do you think you have achieved so far in terms of your original goal?

It all started with a simple thought: if by spreading awareness on HIV/AIDS, one person can be saved or can benefit from the message, I have succeeded. I have just two messages to spread.

First, don’t isolate those people afflicted with HIV/AIDS, they have the power to change this world. Secondly, be aware of the risks involved and keep away from them. This is a change that you should bring from within.

I get many e-mails saying that they have benefitted from my messages and that is the only thing that keeps me going.

Have you been able to get the answers that you were searching for in the initial days?

The answer was the message. I then realised if this message stays just with me it is of no use, so I started working to spread it in my village, then moved on to a small town, then I worked with the provincial organisations and today I have travelled 126 countries. I want to go to 191 countries by the end of 2020, spreading the message.

After travelling to many countries and meeting many people what are the lessons you have learnt?

Learning is very simple. Simple in the sense that I tried a different way of life. Try to live a positive and optimistic life and it is very infectious. Positive thinking can clear obstacles and make a path.

The travel must require a lot of physical and mental strength. Where do you get your strength?

I like to quote Indian philosopher and thinker, Swami Vivekananda. He said: “Arise, awake and stop not till the goal is reached.” His words have always been an inspiration and support. There is also a saying that “All the power within you, you can do anything and believe in the power of you, don’t be let down just stand up and express yourself.” As Swami Vivekananda has inspired many Indians, I want everybody in this world also to be inspired by his words.

Apart from HIV/AIDS Awareness, you are also lecturing in your travel on Indian culture, Can you tell us a little bit about that?

For almost two and a half years I travelled across India and I have been to all the states and provinces. I wanted to share all that I observed, from food, costumes and traditions of all the places in India. This became an integral part of my journey to teach the values that our ancestors have bestowed upon us. I also give lectures on the traditions followed in Medieval India on literature & performing arts. I have given these lectures in more than 3,000 institutions and I make it interactive. I believe if I can plant the seeds of good values in the mind of one student, which can tomorrow grow into a big tree, it is beyond diplomacy.

You are one of the very few people who have seen the Jarawas the indigenous tribes of Anadaman nicobar Islands in India. What was your experience with them?

It was by chance through various diplomatic contacts and help I finally reached the Jarawas. After initial skepticism of me being there, they warmed to my presence as I started listening to them and became a part of their lives. I stayed with them for 15 days, observing them.

They are the most sophisticated people. Though they have no idea of modern science, but their medical methods were extremely effective. They are very connected with nature, and they are far more developed and forward thinking than the modern society.

By accident I ate a poisonous fruit and was almost unconscious, but they gave me the extract of another fruit and that saved me. There are certain things that can only be experienced. This is one such experience, which remains just a memory and never documented, as I didn’t have a camera at that time.

Can you tell us also about your experience creating awareness among commercial sex workers?

While travelling in India, I visited 30-40 places where commercial sex workers operate. My main focus of visiting them is to create the awareness about safe sex. Only two women amongst the 10,000 odd women I met were willingly in this profession – I feel most of these women have been forced into prostitution and are illiterate. The best way they can live a dignified life is to be safe and be away from deadly diseases like HIV/AIDS. I always respect them and love them. I just want them to live a dignified life.

What other interesting stories do you have from your journey?

The first incident was in Afghanistan, where I was held captive for 24 days by Taliban forces. My cooking skills helped me as I was able to maintain a relationship with them. One of them, who knew English, explained my mission to the others and they released me.

Another one is while I was travelling in Central Asia in sub-zero degree temperatures. There was no one around and I knew I had to cycle a long way to reach a point where I can rest. Then a truck passed by and offered me help – they said I go with them I could stay in their home. I was pleased and agreed. After a few kilometres of driving they told me to get down and give them all that I had. I felt so helpless, but could not do anything.

What have you been doing in Buenos Aires?

I visited three international schools and gave lectures. I also did some cultural exchange programmes by sharing and cooking Indian food for people in Buenos Aires. Usually I try to connect with the people through NGO’s in different countries. Even though I wont be able to meet everyone at least I make sure my message reaches a few people.

Your ultimate dream is to build a Global Village in your hometown. Can you explain this new initiative and how much progress you have made so far?

I am selling kilometres of my travel to my friends and families all over the world. One third of the funds covers expenses of my travel and the other two thirds I will dedicate for our global village.

I started to build a house called People House and its almost done in Kolkatta. I have been on the road for 4,000 days and people in all parts of the globe have always invited me to their houses. So, I thought I will invite all of them to this house, and they feel that they are a part of my family.

The blueprint for one part of the global village is ready and we are expecting some support from government and the process is going on. I have around 20 people working now on this project. When the land is ready I will invite every one I met in my journey to come and help me build this and it will become ‘Our Village’. If I succeed in doing this I think I will be able to bring in a concept of Global oneness.

You can read more about Somen Debnath’s journey at his website.