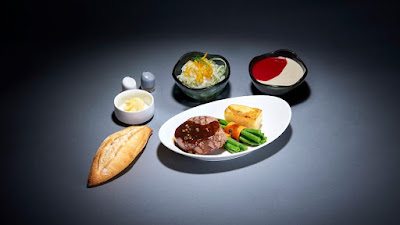 Lufthansa has announced a new a la carte dining option for economy and premium economy passengers on long-haul flights.

From May customers will be able to choose from seven paid-for meals costing between €13 and €33, with choices including grilled steak, a Japanese Bento Box, hearty Bavarian snacks, an Asian vitality menu with quinoa, Mediterranean pasta with shrimp, and a Thai curry.

The meals will be available on almost all of the carrier’s intercontinental flights from Frankfurt and Munich, and can be ordered at lufthansa.com up to 24 hours before departure.

Lufthansa is keen to stress that the a la carte options do not replace the existing food and drink offerings in Economy and Premium Economy Class, but complement them at the passengers’ individual request.

The German carrier joins a number of major airlines in offering a la carte service alongside the free meal option.

Air France recently added a My Fun Menu to its existing paid-for meal range, featuring a burger, crisps, yoghurt and doughnut, while British Airways offers a paid-for menu on selected flights from Heathrow.

British Airways meals come with three courses presented on business class china dishes on a tray with a proper wine glass, bread, crackers, butter and cheese on the side.

The drinks are the normal economy choice, you don’t get business class wines, for example.

Sinead Ferguson, BA’s menu design manager, said: When you’re asking customers to pay, you want to give them a much more enhanced meal, and I believe we have achieved that.

One of the meals I was keen not to do was a curry as we can serve a curry throughout the cabin – people can eat that for free. I was also keen not to give vegetarians a plate of pasta.

The pre-paid meals are available to order online on outbound flights from London Heathrow to most long-haul destinations from 30 days to 24 hours before departure.

BA has extended the offering to outbound flights from Gatwick, as well as to various inbound flights as well.

We’d like to get it on inbound routes but it creates a few more challenges as around the world we have various caterers and the most important thing is people get the same standard as going out, said Talbot.

Talbot added that for those not wanting to fork out extra on food, BA tickets will always include a free standard economy class meal.

In December 2013, in an effort to reduce passenger disappointment at not getting their first choice of meal in premium economy, business and first.

BA introduced the option of pre-ordering food from the existing onboard menu at no extra charge on routes out of Heathrow.

Talbot said: Pre-order for premium customers will start in April next year from Gatwick, and from London City to JFK, so there is guaranteed choice.

Beginning with one of BA’s most popular starters: vegetarian sushi. The tray pops with colour – I enjoyed both the beetroot goat cheese maki and the fire roasted red pepper maki.

A grilled green asparagus nigiri is offered as well, alongside slices of pickled ginger and wasabi with a cute plastic fish-shaped bottle of soy sauce.

A fairly generous portion of chicken pay ca paw with egg rice and wok-fried vegetables serves as the main.

It is worth noting that the chicken is coated in a corn flour-type breading and, while it was tender and the sauce was nice with little spice, the coating was not quite as crisp as I had hoped.

Ferguson wanted to create a meal that was rich in “umami” – the fifth taste after salt, sweet, bitter and sour that I best described as savoury.

She said: Tomatoes, mackerel, mushrooms, Parmesan and soy, for example, are all umami-rich ingredients. In the design of airline meals it makes a difference as our taste bids are impaired at altitude.

Instead of a traditional side of bread, the meal offers crunchy prawn crackers kept in an air-tight bag with sweet chilli sauce. The dessert is a smooth green tea tiramisu.

Catering to those who want to maintain a healthy lifestyle while travelling, this tray has a calorific value of 838kcal not including bread, cheese and crackers and costs £15.

Thai-style avocado rolls with a sesame dipping sauce serve as the tray’s starter, with the main being sustainably sourced poached cod with steamed seasonal vegetables presented en papillote, a method of cooking where food is put into a folded paper pouch and then baked.

A Kaiser roll, butter, cheddar cheese and crackers come on the side. Dessert is a Greek yoghurt and honey mousse bar with grapefruit carpaccio.

Although I am not a huge fan of fish, I found the en papillote method to be quite nice especially when paired with the shredded steamed vegetables. It didn’t have much flavour, though, and the fish still had the skin on.

The rice paper around the rolls was too thick but the dessert was divine – not too simplistic or light. For a healthy meal, the overall tray was quite high in calories.

Vegetarians are often greeted with the same meal over and over again – pasta. Pasta can be great, but BA wanted to offer something better.

Priced at £15, this vegetarian meal even had my taste buds buzzing, and I’m a meat eater.

The tray was full of colour, and with my first bite of the glazed goat cheese with marinated beetroot salad, I knew I was in for a treat.

To be honest, I didn’t even know I liked beets – in fact, I have to say this was my favourite starter from all of the trays.

The presentation was appealing, as was the flavour, although the sauce was a bit rich and I am unsure if I would be able to eat the entire portion.

However, for a vegetarian dish I believe it would be quite filling and is a huge step up from a quick and easy pasta.

A Kaiser roll and crackers with cheese and butter are again offered on the side, while the dessert is a lemon meringue pie, featuring a homemade lemon curd.

Paired with a perfect meringue, the flavour of real lemon made it almost impossible not to gobble down the entire thing. This was definitely my favourite dessert.

For £16, travellers can enjoy a traditional English meal. The Taste of Britain tray features Loch Fyne smoked salmon with crème frâiche and caper berries to start.

The salmon was very fresh with understated presentation making it a nice, simple choice with a heavier main to follow. It works nicely with the Kaiser roll; crackers and cheese are again provided.

The main is slow-roasted Wiltshire pork belly locally sourced. I felt the pork got most of its flavour from the fat, which wasn’t what I was looking for.

However, the celeriac mash and sautéed broccolini that it was paired with was quite nice.

To finish is a classic dessert of summer pudding filled with juicy berries not too sweet nor too sour and Cornish clotted cream on the side. One of my favourites.

Priced at £18, the Gourmet Dining meal is the most frequently ordered tray. The intention was to create a truly luxurious tray of food.

Passengers begin with poached king prawns dressed in a simple Marie Rose sauce, which has sliced mushrooms running through it.

At first, this may look and sound like an odd pairing, and while I wondered if the sauce was a bit too ordinary for the juicy prawns, it was surprisingly appetising. It was my second-favourite starter.

The main was braised cheek of beef from Herefordshire, which was perfectly cooked and tender, with smooth potato mousseline and roasted root vegetables surrounding it.

Accompanied by a Madeira shallot jus with a thicker consistency, I was surprised to find that it was not too rich, or at least not quite as rich as the sauce featured in the vegetarian meal.

The usual Kaiser roll, spread and crackers are included on the tray, along with BA’s first chocolate-based dessert.

The decadent chocolate ganache bar with passion fruit coulis is an unusual combination of sweet with a hint of tart fruit. Alongside crushed, toasted hazelnuts, the flavours really work together well.

This is the only tray I didn’t try. Priced at £15, it appears to be step up from the typical economy breakfast.

There are no baked beans as this would have made the dish look messy after re-heating.

Air France has launched a new My Fun Menu option for passengers on its long-haul services departing Paris CDG and Orly.

The paid-for menu – which adds to the carrier’s existing A La Carte choices on long-haul flights – includes a burger made from French beef, with Emmental cheese and Bearnaise sauce, as well as a packet of Kettle crisps, a mini Yop yoghurt, a doughnut with caramel filling, and a bag of Haribo sweets.

The option is available for purchase for flights departing from April 1, and costs €13, or 4,500 Flying Blue miles. 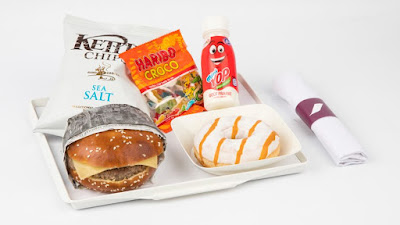 Air France says that the new feel good menu will delight the taste buds of the most demanding gourmands, although it adds that it notably meets the expectations of teenagers and young adults.

The airline now offers a total of five paid-for meal choices on long-haul flights, including a seafood Ocean Menu, and a menu designed France’s Lenotre group of restaurants and boutiques.

Air France continues to offer a complimentary food and drink offering on its long-haul flights, described as follows on its website:

The meals combine a gourmet touch, balance and originality, providing a choice of two hot dishes accompanied by a fresh box containing fruit, cheese and butter.

This complete meal also comes with coffee, tea and an after-dinner drink served by the cabin crew.