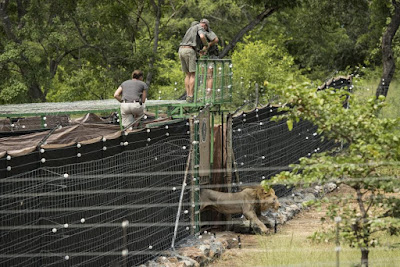 Four years after the last lion was seen in Liwonde, African Parks have reintroduced the first of several wild lions back into the National Park.

In partnership with the Department of National Parks and Wildlife (DNPW), and with support from the Dutch Government and the Lion Recovery Fund, two mature males were released into enclosed bomas in the park after being safely translocated from Majete Wildlife Reserve, where lions were reintroduced in 2012.

They will remain in bomas for several weeks to allow close monitoring of their wellbeing, adjustment, and bonding with two lionesses which will be translocated from South Africa in March, before they are all released in to the wider park.

While the translocation hails the return of this iconic predator to Liwonde, it is also symbolic of Majete’s extraordinary restoration.

Majete’s pride was entirely poached out decades ago, but since their reintroduction, the population has grown to the extent that it can assist in repopulating Liwonde, 200 km north-east of Majete.

African Parks will further supplement the populations in both parks over the coming months, with the translocation of up to 12 additional lions from South Africa.

This is an important milestone for lion conservation in Malawi, where populations of the vulnerable species are being revitalised as part of an effort to restore the country’s parks, rehabilitate wildlife populations and encourage tourism for the benefit of local communities.

It restores a key species that is critical to the healthy functioning of the natural system, contributes to the establishment of an important local predator population, and will significantly benefit tourism as a mechanism for socio-economic growth.

The arrival of these big cats lays the foundation for a secure national population of lions, helping to further distinguish Malawi as an emerging premier wildlife destination.

With the UN World Wildlife Day on Saturday 3rd March highlighting the plight of big cats across the world, Malawi’s lion translocation is an extraordinary example of the conservation measures being taken to secure a future for Africa's most iconic cat.

Just over a century ago, more than 200,000 wild lions were living throughout Africa, but in just two decades, Africa’s lion population has decreased by 42%.

Today, wild lions are extinct in 26 African countries, and there are only about 20,000 lions left in wilderness areas, prompting the International Union for the Conservation of Nature (IUCN) to classify lions as Vulnerable on the Red List of Threatened Species.

Threatened by habitat loss, human-wildlife conflict and loss of prey, their numbers are steadily decreasing, and unless urgent actions are taken to ensure their survival, it is likely that lions will become an endangered species.

African Parks assumed management of Liwonde in partnership with the DNPW in 2015, and since then has completely overhauled law enforcement to secure the park.

They have constructed a robust perimeter fence enclosing the entire park, established rigorous ranger patrols, and worked extensively with local communities, making significant progress in revitalising habitat and wildlife populations through the reduction of poaching and mitigation of human-wildlife conflict.

The lions have each been fitted with tracking collars to facilitate intensive daily monitoring.

For a long time Malawi’s stunning beaches, beautiful and varied landscapes and fascinating and friendly cultural experiences have been some of the best that Africa has to offer.

With the wildlife transformations currently underway courtesy of African Parks, Malawi’s safari experiences are now starting to match its other attractions as it emerges as one of the most complete destinations in Africa.