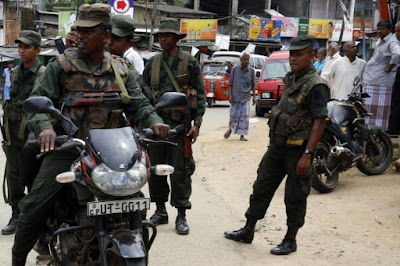 The department of Sri Lankan tourism issued a statement on Thursday, where it said that the situation in Kandy is fast improving and no violent incidents have been reported in the last 18 hours.

Meanwhile, Ranjith Madduma Bandara was sworn in as the in-charge of police.

However, there were reports of violent clashes between Buddhist mobs and Muslims in Sri Lanka for the third day in a row early on Thursday.

The clashes started after mobs burnt 11 Muslim owned properties in Kandy, following reports that a Buddhist man had been killed by a group of Muslims.

Buddhist mobs swept through Muslim neighbourhoods in Sri Lanka's central hills, destroying stores and restaurants despite a curfew, a state of emergency and a heavy deployment of security forces, residents said on Thursday.

About 50 people broke into a Mohamed Ramzeen's small restaurant in the town of Pilimathalawa on Wednesday night while the curfew was in effect, destroying nearly everything they found, he said.

The security in town is inadequate, Ramzeen said. We fear for our lives.

Others in the area around Kandy, the main hill town, described similar attacks since the violence began early this week.

The streets of most towns were all but empty Thursday except for police and soldiers.

Mohamed Nazar said only he and his 64-year-old father remained in their house after they sent other family members to a relative's house for safety after the violence started.

Around 8 pm, rocks started hitting the house with a mob shouting outside and we put the lights off. Then a large flame came and the house caught fire, Nazar said.

He said his father hid under a sofa, but he grabbed him and they ran out.

Police came and put out the fire, but much of his family's belongings were destroyed, he said.

Later, the Bishop of Colombo also issued a statement urging the government to take action against the perpetrators.

A position temporarily held by Prime Minister Ranil Wickremesinghe after public criticism over the government’s inaction to curb violence.

The Tourism Ministry said it did not expect any major impact of the seven-day emergency on the US$4 billion industry.

Kandy is a prime destination for foreign travellers, famous for its Tooth temple in honour of Buddha, tea gardens and natural beauty.

For tourists, this is not the ideal situation. There was nobody on the street save for the army and police.

Sri Lanka was for decades plagued by war between government forces and Tamil separatists. The government defeated the rebels in 2009.

EU ambassadors said in a statement that the latest attacks were very worrying and it is important that the government bring the perpetrators to justice.

Police in Sri Lanka said on Thursday (March 8) they had arrested the suspected leader and nine other suspects behind a wave of anti-Muslim attacks by Sinhalese Buddhist hardliners in a central highlands region this week.

Sri Lanka’s Kandy district has been rocked by communal clashes since Sunday following attacks on members of the minority Muslim community by nationalist crowds from the Sinhalese majority.

At least two people have been killed.

President Maithripala Sirisena decreed a state of emergency in Kandy on Wednesday, but crowds carried out more attacks targeting mosques and businesses belonging to Muslims overnight.

Police spokesman Ruwan Gunasekara said all 10 people arrested belonged to a hardline Buddhist group. He named the suspected leader as Amith Jeewan Weerasinghe and said he belonged to a group called Mahason Balakaya.

He said the group had published videos of hate speech directed against Muslims.

Most of Sri Lanka’s Muslims live in the east and centre of the island and make up about 9 per cent of its 21 million people.

Buddhists make up about 70 per cent and ethnic Tamils, most of whom are Hindus, about 13 per cent.

Residents in Kandy district said the death of a Buddhist youth after an altercation with a group of Muslims had triggered the violence.

Two days after the death, a large crowd of Buddhists brought a symbolic coffin to protest against the death of the driver in Digana town, where most of the shops are either owned or rented by Muslims, residents said.

First they burnt the mosque, there were even women among the attackers. Then they started to burn all the Muslim shops, a resident said.

He said he had 3.7 million rupees (S$31,317.92) lying in his car which he had collected to start a new electric goods business.

But a crowd set fire to his car and beat him up before he could escape.

An upsurge of attacks against Muslims by Sinhala Buddhist militants in Sri Lanka has raised fears of a new round of communal violence, the International Crisis Group said in a report.

On Thursday, shops were still smouldering in Katugasthota town, where mobs also went on a rampage picking on the small stores and eateries run by Muslims. Groceries were strewn on the street.

Soldiers stood guard outside mosques in the area.

The situation is improving and there have been no major incidents of violence reported in the last 12 hours, said Major General Rukman Dias, the army commander in the area.

But he said the curfew would be re-imposed in Kandy as a measure of precaution.