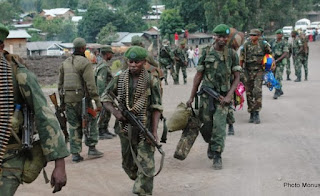 The United Nations accused "elements" of the Congolese army on Tuesday of digging most of the mass graves it has identified in the insurrection-ravaged Kasai region of central Democratic Republic of Congo.

The report by the UN Joint Human Rights Office in Congo (UNJHRO) is the first time the UN has directly suggested that government forces dug the graves.

Congo's human rights minister was not immediately available for comment, but the government has repeatedly denied its troops were responsible for dozens of mass graves discovered since the Kamuina Nsapu group launched an insurrection last August and called for the departure of government forces from the area.

"As of June 30, 2017, UNJHRO had identified a total of 42 mass graves in these three provinces (of Kasai), most of which would have been dug by (Congolese army) elements following clashes with presumed militia members," the report said.

Earlier this month, the UNJHRO said it had identified 38 more probable mass graves in the western part of Kasai, bringing the total number to 80.

More than 3,000 people have been killed and 1.4 million displaced in the violence, part of growing unrest in the country since President Joseph Kabila refused to step down when his mandate expired in December.

The violence has triggered fears of a wider conflict in the large central African country, a tinderbox of ethnic rivalry and competing claims over mineral resources. Millions died in civil wars between 1996 and 2003, mostly from hunger and disease.

The government has blamed the Kamuina Nsapu group for the mass graves and also claimed that some of the sites identified by UN investigators have turned out not to contain bodies.

It also denies UN allegations that its troops have systematically used excessive force, although a court convicted seven soldiers this month for murdering suspected rebel fighters in a massacre that was caught on video.

Last month, the UN Human Rights Council approved an international inquiry into the violence in Kasai. The UN High Commissioner for Human Rights is expected soon to name a team of experts to lead the probe.

Meanwhile, there have been more than 2,800 human rights violations recorded in Congo since the beginning of the year, the UN said on Tuesday.

Most of these violations took place in Kasai province, the UN High Commission for Human Rights said.

More than 170 people have been detained for political activity, the UN said.

The country's armed forces have been responsible for most of the killings in the country, with 491 deaths in the Kasai province alone, including 140 children. Many of these were during clashes with rebel fighters.

The international rights organisation also recorded violations in the capital, Kinshasa, where protests have taken place.