LUFTHANSA: Baby Born On Lufthansa Flight From Bogota To Frunkfurt 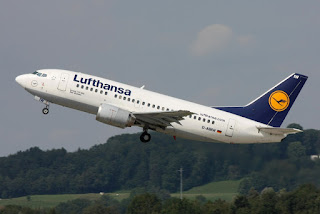 Lufthansa flight LH543 from Bogota to Frankfurt certainly didn’t go as expected for the crew and passengers on board.

A 38 year-old woman from Bulgaria gave birth to a baby boy during the flight over the Atlantic.

The mother and baby are both doing well.

The time of the birth at 12:37 was normal – the place of birth rather not.

Airbus A340-300 with the registration D-AIFC also named Gander/Halifax took off from the Colombian capital Bogota on July 25th at 21:00 local time with a total of 191 passengers and 13 crew members on board.

During the flight, the woman started experiencing premature labour pains.

The crew moved several passengers to seats in the front, and the rear part of the plane became an impromptu delivery room.

The entire area was closed off with a privacy screen.

The birth proceeded without complications, assisted by cabin crew members and three doctors who happened to be on board.

The new mother, Desislava, thanked the team of helpers and named her son Nikolai – the same name as one of the doctors.

To place the mother and her child into medical care as soon as possible, the captain decided to make a stopover in Manchester, where they landed at 13:09 local time, now with 192 passengers upon arrival.

Once the mother and baby were safely in the hands of the paramedics, the captain took off once again for Frankfurt Airport.

This extraordinary flight then landed in Frankfurt at 17:28 local time.

I’ve never experienced anything like that in my 37 years of professional experience.

The entire crew did an extraordinary job.

This was great teamwork, with everyone doing their part,” said Kurt Mayer, the captain of flight LH543.

After landing, I immediately went to the mother and the new-born child to welcome him to the world.

Aside from the birth of my own son, this was the most moving moment of my life,said Mayer.

Births on board are quite rare.

This has been the eleventh birth on a Lufthansa flight since 1965.

The cabin crew is regularly given first aid training, which also includes initial measures and instructions in the use of medical materials and instruments for a possible birth on board.

Lufthansa recommends that pregnant women talk with their gynaecologist about the upcoming flight.

Pregnant women with an uncomplicated pregnancy may fly with Lufthansa until the end of the 36th week of pregnancy, but from the 28th week onwards, it is recommended to carry a current certificate from their gynaecologist.