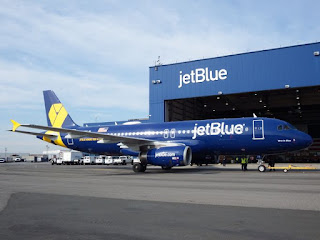 JetBlue Airways is seeking a developer for a new terminal at New York JFK airport as the carrier targets expansion of its international facilities there.

New York-based JetBlue has released a request for qualifications (RFQ) to developers.

The terminal would be built in phases on the site of the former Terminal 6 and possibly the existing Terminal 7 at JFK, says the airline.

It wants additional international gates and arrival processing capabilities, more curb frontage to complement its existing space in Terminal 5, and an enhanced connection with the airport’s AirTrain system, the RFQ states.

The notice does not include a potential price tag.

JetBlue opened Terminal 5 in 2008 and added international facilities, under a project dubbed T5i, in 2014. The terminal has 29 gates, six of which can handle international arrivals.

This project lays the groundwork for JetBlue’s future leadership in our largest focus city, states Lisa Reifer, the airline’s vice-president of infrastructure, properties and development.

We are seeking innovative, cost- and capital-efficient approaches to governor Andrew Cuomo’s ambitious vision for JFK to deliver a world-class airport experience for our customers and crew members while allowing us to maximise the value of our strategic airport assets.

In January, New York state governor Cuomo announced plans for a roughly $8 billion overhaul and expansion of the terminal complex at JFK. The proposal included expanding Terminal 5, replacing Terminal 7 and realigning the airport’s roadways and taxiways.

While JetBlue holds the rights to redevelop the site of Terminal 6, which was demolished in 2011, the airline does not have the rights for Terminal 7, which is controlled by British Airways.

The UK carrier is planning to make a $65 million investment in Terminal 7, its lease on which runs through 2022.

We are pleased that we will remain at JFK Terminal 7 until 2022 when our lease expires and will work with the Port Authority for our future options at JFK,” says a BA spokeswoman.

Qualifications from potential developers are due 11 August, with JetBlue aiming to release a request for proposals in September and award the terminal project in the first quarter of 2018.

Corgan – which has designed terminals for Delta Air Lines and Southwest Airlines around the USA – and ICF are technical advisers to JetBlue on the JFK project.