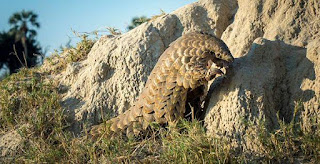 Police in Ivory Coast have seized a record haul of three tonnes of pangolin scales worth an estimated $82,000, in what officials on Thursday called a "massacre".

The shy pangolin's brown scales are made of nothing more than keratin,the same substance as fingernails but are highly prized in Vietnam and China where they are misleadingly touted as bearing medicinal properties.

Soaring demand for the products has seen an estimated one million pangolins plucked from Asian and African forests over the past decade, shunting them onto the list of species at the highest risk of extinction.

The total haul of three tons of pangolin scales contained in more than 60 large bags represented about 4,000 pangolins captured in Ivory Coast, Burkina Faso and Liberia, according to Adama Kamagate with the Eagle Network.

The American group, which helped with the Ivory Coast operation, works with 10 African governments to fight animal smuggling and corruption.

"This is a massacre," UCT commissioner Bonaventure Adomo said.

The seized scales will eventually be handed to conservation services and then destroyed, Adomo added.

According to Gnahore, the haul is estimated to be worth 45 million CFA francs (70,000 euros, $82,000) on the Ivorian market, but could fetch 100 times that amount on the Asian market, particularly in Malaysia and Thailand.

"It's a profitable trade," Gnahore said.

Trade in the world's most heavily trafficked mammal remains a major problem despite concerted efforts around the world to clamp down.

Last year, the reclusive, gentle mammal received the highest level of protection against illegal trade at a global conference in South Africa.

Pangolins, which have bad vision but a good sense of smell and hearing, are covered in tough, overlapping scales, and eat ants using pink, sticky tongues almost as long as their bodies.

Their scales are sometimes used in the production of crystal methamphetamine, an illegal drug.

In Vietnam and China, the going rate for 1 kilogramme (2.2 pounds) of pangolin scales is more than 1,000 euros.

The creature's meat is also prized as a culinary delicacy and its body parts as an ingredient in traditional medicine in parts of Asia particularly China and Africa.

The eight men arrested, from Ivory Coast, Burkina Faso and Guinea, were part of a "large mafia-like network," Gnahore said, adding that the penalties for the men's crimes were too lenient.

"They face only one year in prison and a fine of 30,000 CFA francs. We really hope the law, which dates from 1960, will be reviewed quickly and hardened," Kamagate said.

According to Kamagate, Ivory Coast's pangolin population has been devastated by the trafficking, falling 50 percent in five years, and risks disappearing from the country's forests.