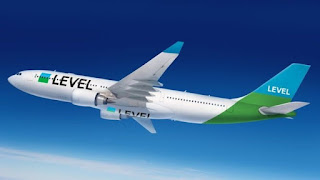 The aircraft will be delivered in summer 2018 and will facilitate Level’s expansion.

Willie Walsh, IAG chief executive, said: “Level has already been incredibly successful and these aircraft will enable it to expand.

“Long-haul flights are now available to many people for the first time and we’re extremely pleased with the customer response in all of Level’s markets.

“It will continue to stimulate demand by providing people with more choice.”

These modern, fuel efficient aircraft will bring both cost efficiencies and environmental benefits to Level.

International Consolidated Airlines Group, S.A., often shortened to IAG, is an Anglo-Spanish multinational airline holding company with its operational headquarters in London, England and its registered office in Madrid, Spain.

It was formed in January 2011 after a merger agreement between British Airways and Iberia, the flag carrier airlines of the United Kingdom and Spain respectively.

It is the sixth-largest airline company in the world, producing €22.567 billion revenue in 2016.The company is listed on the London Stock Exchange and the Madrid Stock Exchange. It is a constituent of the FTSE 100 Index and IBEX 35 Index.

The merger between British Airways and Iberia was completed on 21 January 2011, and shares in the new holding company IAG and began trading in London and Madrid on 24 January.

In March 2011, IAG agreed to purchase eight Airbus A330-300 aircraft and to take options on eight more, to be used for Iberia's longhaul fleet.

On 4 November 2011, IAG agreed in principle to acquire British Midland International (BMI) from Lufthansa for an undisclosed sum, in a deal which would increase IAG's share of slots at Heathrow airport from 45% to 54%.

On 22 December 2011, IAG agreed a binding deal with Lufthansa to acquire BMI for £172.5 million.On 30 March 2012, the purchase of BMI was approved, subject to the condition that the combined group divest itself of 12 daily slots and lease two daily slots at Heathrow airport.

The acquisition was completed on 20 April 2012, and the BMI fleet and routes were integrated into the British Airways schedule throughout 2012.

On 8 November 2012 International Consolidated Airlines Group (IAG) made a cash tender offer to buy Vueling, the Spanish low-cost airline based in Barcelona.

The offer, was €7 per ordinary share of Vueling with the total cost of acquiring the shares anticipated to be €113m. It was funded from internal IAG resources.

An increased offer of €9.25 was accepted by the Vueling board on 9 April 2013 and received majority shareholder approval on 23 April 2013. IAG took control of Vueling on 26 April 2013.In December 2012, IAG completed the merger of the cargo operations of British Airways, BMI and Iberia into a single business unit, IAG Cargo.

In April 2013, IAG confirmed the conversion of options to acquire 18 Boeing 787 Dreamliners into firm orders, in a deal worth around US$4.5 billion.

At the Farnborough Airshow 2014, IAG converted the options for 20 Airbus A320neo aircraft into firm orders which are currently intended to replace 21 shorthaul British Airways aircraft.

In January 2015, IAG made an bid of £1 billion for Aer Lingus. This was expected to be accepted, after the rejection of two prior bids. In May 2015, the Irish government agreed to sell its stake in Aer Lingus to IAG, as did the Aer Lingus board in late January 2015.The takeover became irreversible on the 18 August 2015.

On 1 March 2015 Stephen Kavanagh was appointed Chief Executive Officer of Aer Lingus, and executive director of the Aer Lingus Board.

In March 2017 it was announced that a new low cost longhaul airline named LEVEL was to start operating from Barcelona in June 2017.

IAG's operational headquarters, which controls the management of both its British and Spanish subsidiaries, are at the Waterside building in Harmondsworth, London.

IAG is incorporated in Spain as a Sociedad Anonima, where the company board meetings are held, and is domiciled in Spain for tax purposes.

IAG has a primary listing on the London Stock Exchange and has been a FTSE 100 constituent since 24 January 2011.It has secondary listings on the Madrid, Barcelona, Bilbao and Valencia stock exchanges, and has been a constituent of the IBEX 35 index since 1 April 2011.

The structure of the main operating companies is:

By 2012 it was reported that British Airways profits had been wiped out by Iberia losses, placing the Spanish airline in a fight for its survival. IAG workers in Madrid reported they believed Iberia to be the junior partner in IAG citing deep concern for the airline.

In May of the same year, Iberia had suffered further losses and IAG's balance sheet was now in deep deficit as Iberia fought low-cost competition and a deep recession.

Willie Walsh admitted that perhaps British Airways should have postponed the IAG merger, saying, If I’d known the Spanish economy was going to deteriorate to the scale that it did, we may have delayed the decision but ultimately I believe the merger is the right thing

The most popular type operated is the Airbus A320 series, with a combined fleet of 226 aircraft.

For details of the current aircraft operated by the group, see the fleet details for each of the main operating subsidiaries - Iberia, British Airways, Aer Lingus, and Vueling.

IAG operates the Avios frequent-flyer programme, which was known as Air Miles until 16 November 2011. Avios points are the frequent flyer currency of Iberia, British Airways, Aer Lingus, LEVEL and Flybe,and can also be used for travel within the Oneworld alliance.

A restructure in 2015 meant that all of IAG's affiliated loyalty programmes which use Avios, including Avios Travel Reward Programme, Iberia Plus and British Airways Executive Club were transferred to Avios Group, an IAG subsidiary.
at July 29, 2017