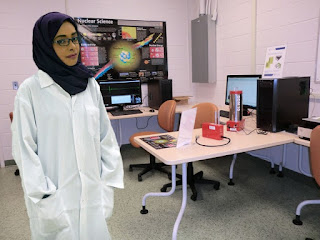 Oman Air, the national carrier of the sultanate, in collaboration with the Italian Agency for Nuclear Physics and the Research Council of the Sultanate of Oman, is delighted to announce its support to sponsor a scholarship for talented physics student Zainab Obuad Al Salhia.

The Italian Agency for Nuclear Physics is the main supervisor of the scholarship, which will focus on the study of the basic components of matter and its laws.

Nearly 5,000 award-winning scientists from all over the world, whose work has already received global recognition, are involved in the initiative.

Al Salhia received the scholarship to work on the project having been recommended by the European Space Agency.

Her work will focus on the fields of particle physics, cosmo physics, nuclear physics and theoretical physics, as well as technological research.

Al Salhia represents the Sultanate at the Space Generation Advisory Council to support the United Nations program on Space Application and is a member of Women in Aerospace Europe.

Commenting on the initiative, Dr. Khalid bin Abdulwahab Al Balushi, Senior Manager of Government Affairs at Oman Air, said: We are proud to engage with prestigious scientific research and delighted to support such a gifted Omani student. It is vital for the future of the Omani economy that we encourage the country’s youth to be technological and scientific innovators.

Zainab Al Salhia, who is currently a civil engineering student at Caledonian College of Engineering, Oman, said: I wasn’t expecting this opportunity to come about at this point, at this time, but I have a great interest in the Sultanate's participation in such international schemes and its collaboration with major European institutions focused on scientific research and development.

Al Salhia expressed her sincere thanks and gratitude to Oman Air and the Research Council of the Sultanate of Oman for their financial and moral support.

She also commented: This opportunity highlights the importance of nuclear physics in society, which focuses on the structure of our physical world, including stellar nuclear reactions, the generation of energy and the chemical elements.

Nuclear physics helps us understand how heavy elements are formed from stars’ violent explosions. Today, nuclear scientists are conducting vital nuclear research in advanced facilities for the most important fields such as medicine, materials, energy, security, and climate.

The economic impact of nuclear physics applications is considerable – the use of particle beam accelerators to process and test a wide range of products alone brings in more than RO 500 million.