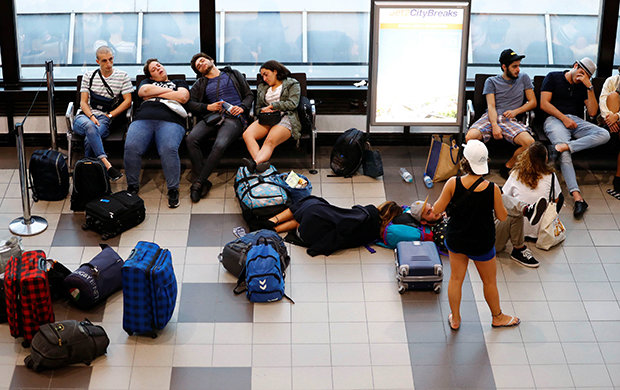 More than 74,000 holidaymakers have had their plans ruined today after almost 400 flights were axed in a huge Europe-wide walkout.

Pilots in the Netherlands, Ireland, Germany, Belgium and Sweden are all taking industrial action today.

The walk-out is part of an ongoing dispute over working conditions, which has already seen pilots who are members of the Irish trade union FORSA stage four separate one-day strikes.

The strike is the biggest one-day walkout in the airline’s history.

And now Ryanair is refusing to compensate customers caught up in the disagreement.

The budget airline said in a statement: Ryanair fully complies with all EU261 legislation, however as these flight cancellations were caused by extraordinary circumstances, no compensation is due.

Under EU261 legislation, no compensation is payable when the union is acting unreasonably and totally beyond the airline’s control.

If this was within our control, there would be no cancellations.

But airline compensation experts disagree, saying passengers are entitled to up to £540 in compensation.

They have blammed Ryanair for deceiving passengers.

Earlier this year the European Court of Justice ruled: A 'wildcat strike' by flight staff does not constitute an extraordinary circumstance, which suggests Ryanair is liable to pay compensation to its customers.

Travel expert, Carolina Vicente, from Columbus Direct said: The European Court has ruled that when airline staff go on strike this is not an extraordinary circumstance because it is both an event which is inherent in the running of an airline and also within its control.

This means that you can claim compensation for delays or cancellations caused by the airline staff going on strike. 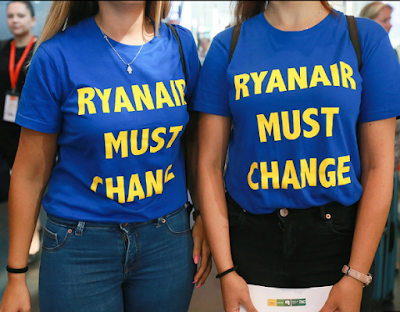 Depending on how you’ve been inconvenienced and the flight you had booked, you could receive between €125 to €600 per person.

Ryanair is facing a rising tide of protests from unions frustrated at the slow progress being made in negotiations over collective labour agreements.

Disgruntled pilots from the five countries will walkout for 24-hours today, throwing holiday plans into chaos in the height of the summer season.

Passengers whose flights have been cancelled have been informed by text or email, but all those travelling to and from the affected countries with Ryanair on Friday are advised to check with the airline.

Ryanair slammed the strike as unnecessary.

The airline operates more than 2,000 flights a day, serving 223 airports across 37 countries in Europe and North Africa.

Since the it first recognised unions in December 2017, walkouts have been staged multiple times by Ryanair staff in various countries.

One of the most severe was the 48-hour cabin crew strike on 25 and 26 July, saw a total of 600 flights to and from Spain, Portugal, Italy and Belgium cancelled, ruining the travel plans of 100,000 passengers.

Disgruntled cabin crew issued a list of 34 demands, ranging from a fair living wage to not being forced to open an Irish bank account.

Ryanair called the demands pointless, and posted details of how much the cabin crew earn and said they receive an annual uniform allowance of €400.

Spanish pilots union Sepla announced it is taking action against the Irish airline in Spain's High Court over its pilot contracts last week.

The Spanish pilots’ union – which represents around 500 of the 800 Ryanair pilots in Spain says it is going to sue the airline after a year of failed talks.

After a year of negotiations, the failure of Ryanair to recognise Sepla and apply Spanish labour legislation for the pilots who operate in Spain forces the union to take a legal path to attain this objective, the union said.