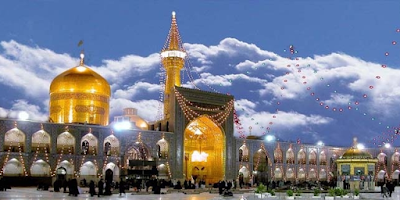 The Imam Reza shrine in Mashhad, Iran is a complex which contains the mausoleum of Imam Reza, the eighth Imam of Twelver Shiites.

It is the largest mosque in the world by area. Also contained within the complex are the Goharshad Mosque, a museum, a library, four seminaries, a cemetery, the Razavi University of Islamic Sciences, a dining hall for pilgrims, vast prayer halls, and other buildings.

The complex is one of the tourism centers in Iran and has been described as the heart of the Shia Iran, with 12 million Iranian and non-Iranian Shias visiting the shrine each year, according to a 2007 estimate.

Every year the ceremony of Dust Clearing is celebrated in the Imam Reza shrine.

It dates back to the era before the Islam religion. It had been placed at the fork road of Sanabad, Neishabour, Sarakhs, Toos and Radkan.

In fact, this fortress has been a place for the frontier guards to take position and establish the security of these roads and regions.

After the demise of Harun al-Rashid, he was buried in this place. Due to this historical event, the Dar-ul-Imarah was known as the Mausoleum of Haruniyyeh.

The original inner building of Dar-ul-Imarah has been in fact a temple used by the Zoroastrians to worship. This building was demolished by the order of al-Ma’mun, and then it was reconstructed according to the special architecture of Khorasan.

Four plain and short walls, covered with a low-slope dome, were constructed around the building. Afterwards, the name of the mausoleum Haruniyyeh was changed and known as the Mashhad-ur-Reza, due to the Holy Imam. Mashhad literally means a place where a martyr has been buried.

After this event, the location was called as Mashhad al-Ridha meaning the place of martyrdom of al-Ridha.

Shias and Sunnis began visiting his grave on pilgrimage. By the end of the 9th century a dome was built on the grave and many buildings and bazaars sprang up around it. For the next thousand years, it has been devastated and reconstructed several times.

The celebrated Muslim traveler Ibn Battuta visited Mashhad in 1333 and reported that it was a large town with abundant fruit trees, streams and mills.

A great dome of elegant construction surmounts the noble mausoleum, the walls being decorated with colored tiles.

Opposite the tomb of the Imam is the tomb of Caliph Harun al-Rashid, which is surmounted by a platform bearing chandeliers.

However, the tomb of Harun al-Rashid is not considered sacred, as he was responsible for the murders of the 6th and 7th Shia Imams.

By the end of the third Hijri century, a dome was built on the grave of Imam Reza and many buildings and bazaars sprang around the holy shrine.

In 383 A.H. / 993 A.D., Sebuktigin, the Ghaznevid sultan devastated Mashhad and stopped the pilgrims from visiting the holy shrine of Imam Reza.