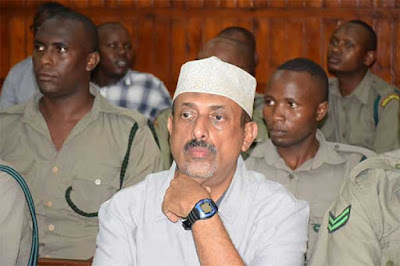 A Kenyan court on Friday overturned a 20-year jail term handed to an ivory trafficking kingpin, in a case that had been seen as a test of the country's will to take on rampant poaching.

Feisal Mohamed Ali, a Kenyan national, was sentenced in 2016 after prosecutors presented him as the head of an organised crime network that spanned African wildlife parks and buyers in Asia, the primary destination for poached ivory.

However on appeal, Mombasa High Court judge Dora Chepkwony rejected the sentence passed by the lower court in July 2016 as unconstitutional.

The evidence relied on to convict the accused person has a lot of gaps and doubts, she said.

Ali was arrested in Tanzania in 2014 in connection with two tonnes of ivory — 228 whole tusks and 74 pieces — found in a Mombasa warehouse.

Authorities put the value of the ivory at $4.2 million (3.8 million euros).

The Kenya Wildlife Service had hailed the landmark judgement against him which included a fine of Ksh20 million ($200,000 or 180,000 euros).

Three months earlier Kenya carried out the largest-ever torching of ivory, including 105 tonnes from thousands of dead elephants, in a grand gesture aimed at shocking the world into stopping the slaughter of the animals.

International law enforcement agency Interpol has stepped up the fight against wildlife crime by targeting key people involved in illegal wildlife trade and other environmental crimes.

In a statement issued in Lyon, France mid November, Interpol’s criminal intelligence officer Ioannis Kokkinis urged the public to provide additional information that could help track down nine suspects including Feisal Ali, who is alleged to be the kingpin of an ivory smuggling ring in Kenya.

Ali, who is wanted by the High Court in Mombasa for dealing in wildlife trophies, is listed as a wanted person in Interpol’s Red Notice. The recent appeal by Interpol has elevated him to the level of most wanted.

Ahmed Kamran, a Pakistani national accused of smuggling 100 live animals through Tanzania’s Kilimanjaro Airport, is also on the list of nine being sought by the Infra Terra operation.

The Infra (International Fugitive Round Up and Arrest) Terra operation was launched on October 6 and focuses on 139 fugitives wanted by 36 countries for crimes including illegal fishing, wildlife trafficking, illegal trade and disposal of waste, illegal logging and trading in illicit ivory.

According to Interpol, Infra Terra builds on the success of similar past operations such as Infra-Americas, Infra-SEA (Southeast Asia) and the global Infra-Red operations in 2010 and 2012, which have so far led to some 600 arrests and positive location of fugitives worldwide.

A similar operation led by Interpol from January to May last year in West and Central Africa, dubbed Operation Wendi, resulted in the arrest of 66 wildlife criminals and the seizure of nearly 4,000 ivory products and 50 elephant tusks, in addition to military grade weapons and cash.

If Infra Terra is as successful as the previous operations, then it will not be long before the nine fugitives are hunted down.

Hot on the heels of launching this operation, Interpol launched, on October 7 in Nairobi, a dedicated environmental crime team for Africa.

The team will work together with national law enforcement agencies and Interpol National Central Bureaus (NCBs) in the region to increase information exchange, support intelligence analysis and assist national and regional investigations, with a particular focus on wildlife crime, said Interpol.

And to assist with planning operations targeting the organised criminal networks behind these crimes, said David Higgins, head of Interpol’s Environmental Security unit.

Scientists at the forensic and genetics laboratory at the Kenya Wildlife Service (KWS) headquarters in Nairobi will be able to analyse and genetically trace seized items such as elephant ivory or rhino horn in order to provide compelling evidence in court cases.

Construction of the Ksh60 million ($623,000) facility has taken nearly three years. Tanzania opened a similar lab at a college in Moshi in 2013 to provide training in forensic science.

The establishment of the laboratory is critical to yielding convictions in courts of law and thus deterring wildlife crimes, said KWS, the body responsible for wildlife protection, in a statement.

It admitted that in wildlife crime cases, prosecutions and convictions are rare and blamed this on the lack of accurate evidence.

In some instances, effective prosecution is hampered by lack of concrete expert evidence that can link a poacher to a confiscated rhino horn or ivory and relate it to a specific poaching incident, KWS said.

Elephants and rhinos are under siege in Africa, their poaching driven by demand from Asia.

Studies have found that the Kenyan port of Mombasa is the smugglers’ exit point of choice for moving illegal wildlife products out of Africa.

A 2014 study by conservation organisation Wildlife Direct concluded that wildlife crimes are mismanaged by Kenyan courts and that only four per cent of offenders convicted of wildlife crimes went to jail.

The study found that in 70 per cent of the cases it examined, case files had gone missing, making effective prosecution impossible.

Kenya’s most high-profile wildlife crime case to date is that of suspected ivory trafficking kingpin Feisal Mohammed Ali who was wanted by Interpol and arrested in Tanzania in December.