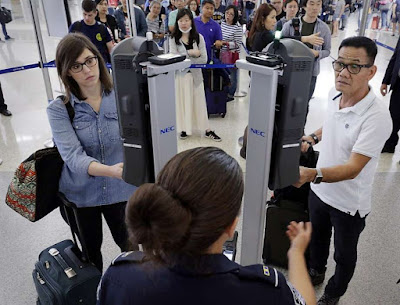 Mineta San Jose International Airport is one of several airports nationwide chosen by the United States Customs and Border Protection agency to use facial recognition to screen all arriving and departing international travelers.

Here's one of the biggest changes travelers can expect: all departing international passengers will be photographed at the gate before they board their flight.

The images give the government verifiable biometric proof that a U.S. visitor has left the country, and presumably, will also be used to match citizens when they re-enter the country.

When entering the United States off a flight, passengers are photographed at passport control.

Facial recognition software compares the image against passport or visa photos the federal government already has on file.

The process takes less than a second. It eliminates the need for agents to scan passports manually and visually compare travelers to their passport photos, both are time consuming tasks that slow down immigration queues.

Interviews and customs luggage inspections will still go ahead.

Travelers enrolled in Global Entry will see no changes in the way they enter the country since those kiosks already photograph and fingerprint arriving international passengers.

Travelers who use the Mobile Passport app to digitally fill-out immigration forms and customs declarations can continue to use it, but will also go through the same facial recognition process at passport control.

SJC will install biometric readers at each of the seven gates used for international departures to photograph travelers leaving the country. That's coming in the fall, we're told.

At SJC, the process has already expedited long passport screening lines which have grown to become unbearable for many travelers.

The airport has seen a staggering increase in the number of international flights in recent years such as Aeromexico, Air China, All Nippon Airways, British Airways, and Lufthansa have all launched flights to SJC in the last decade.

Simultaneously, airport officials said there has been a shortage of Customs and Border Patrol agents to staff passport control counters because the agency isn't able to recruit and retain enough people willing to put up with the Bay Area's high cost of living.

The airport hopes the new automated screening process will shorten wait times and put an end to a lot of the frustration.

The use of the technology has raised suspicions by civil liberties groups, which oppose the government's collection of the photographs of citizens.

The biggest danger is that this technology will be used for general, suspicionless surveillance systems, the American Civil Liberties Union warned.

State motor vehicles agencies possess high-quality photographs of most citizens that are a natural source for face recognition programs and could easily be combined with public surveillance or other cameras in the construction of a comprehensive system of identification and tracking.

Passengers who want to opt-out of the biometric screening will have the option to do so.