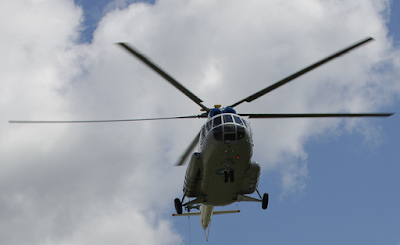 Thirteen climbers and three crew members are unaccounted for after a helicopter they were travelling in had a hard landing in the mountains of Tajikistan, officials say.

Russian news agencies said the helicopter had taken the climbers from base camp on the Fortambek glacier in the Ismoili Somoni peak.

They said most of the climbers were thought to be Russians.

At 7,495m (24,590ft), the Ismoili Somoni mountain is Tajikistan's highest and a major tourist attraction.

It was known as Communism Peak during the time Tajikistan was part of the Soviet Union and renamed after a 10th-Century Tajik national hero in 1998.

It forms part of the Pamir mountain range, often described as the roof of the world.

There were 13 Russian tourists on board, one Belarussian citizen and one Spanish resident

The Russian embassy in Dushanbe is currently investigating the causes of a crash landing of a Mi-8 helicopter, reportedly carrying 13 Russian citizens on board, in the mountains of Tajikistan.

The embassy is working on this issue, the diplomatic mission informed. They did not confirm whether the helicopter was carrying Russian citizens.

Two helicopters have been sent to the crash site carrying rescue teams and medical workers.

Tajik media reported that on Sunday, at about 16:30 local time (14:30 Moscow time) a Russian Mi-8 helicopter performed a crash landing in the mountains while transporting climbers.

According to the local media, there were 13 Russian tourists on board, one Belarussian citizen and one Spanish resident, as well as three members of the crew, all citizens of Tajikistan. The media reports of casualties and injuries among tourists.