INDIA: Snakes Go On Rampage As Floodwaters Recede In Kerala. More Than 400 Killed By Floods 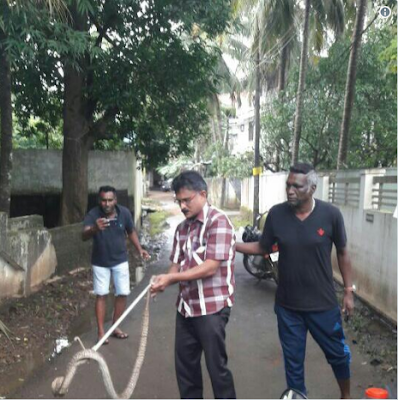 Flood victims returning home in the Indian state of Kerala have been warned to prepare for a new menace of Snakes.

Several snake catching teams have been deployed to affected areas, amid fears the reptiles could be hiding in cupboards, under carpets, or inside washing machines in previously submerged homes.

Hospitals in the worst-hit areas are readying supplies of anti-venom.

Devastating flooding has killed around 400 people in Kerala since June.

More than a million others were displaced, with many of them taking shelter in thousands of relief camps across the southern state.

As well as the glut of snakes, scorpions and other insects are reported to have moved into human homes.

On social media, footage emerged of a woman trying to stop a 10ft (3m)-long python from entering her garden by tapping a broomstick on the ground.

Several hospitals in northern and central Kerala, where flooding was especially acute, have reported a spike in patients with snake bites.

One was found inside the wardrobe on the second floor of a house while another one was inside a shelf in a house, he said.

Returning residents are being urged to sift through their belongings using a stick.

When rescuers in India's flood-ravaged southern state of Kerala reached a flooded hut in the city of Thrissur, the couple living there refused to leave without their 25 dogs.

The water was rising, and the dogs were huddled on a single bed. The rescue workers had arrived on boats, and Sunitha, who uses only one name, flatly told them she and her husband would not leave without their stray and abandoned pets.

Our neighbours had been moved to schools and camps nearby. Rescue workers said that we could not bring our dogs to the relief camp, she said.

So the workers went back and got in touch with an animal rescue group.

Sally Varma of Humane Society International said that their volunteers arrived soon, and arranged for the dogs to be taken to a special shelter for affected animals.

Ms Varma said she has started a fundraiser for the family and its pets so a kennel could be built at their home after the floods recede.

Nearly 400 people have died in the worst flooding Kerala has witnessed in a century. Thousands remain stranded.

More than one million people have been displaced, with many of them taking shelter in thousands of relief camps across the state.

But what is striking is how hundreds of animals are being rescued in the affected areas.

In what appears to be one of the biggest animal rescue operations during a natural calamity in India, hundreds of volunteers and animal rescue workers have travelled to flood-affected areas.

Social media is awash with dramatic rescue videos, a rescuer removing his life jacket and putting it on a Labrador to help it swim to higher ground,.

Drenched dogs being taken out of flooded homes and kennels; and country boats and inflatable rafts carrying dogs, goats and cats to safety.

Rescuers have waded through water, and travelled on boats and rafts to treat, feed and rescue hundreds of animals dogs, cats, goats, cows, cattle, ducks, and even snakes - as the waters have begun receding. Trucks with animal feed and medicines are reaching affected districts.

Some animals have been moved to shelter camps, and others to higher ground. A number of animal rescue help lines have been set up, and rescuers are using WhatsApp and social media to respond to calls.

We are getting more than 100 calls a day on our helpline. The number of animals that have been moved to higher ground and rescued must be in hundreds, Anand Shiva of Kerala Animal Rescue said.

When the flood waters rose, most people tethered their pets and animals and left or were rescued. When they reached the shelter, they broke down and told rescuers that they had left their pets behind.

That became a problem. So many tethered animals just drowned. These animals are natural swimmers, and it is better to keep them free so they can swim to higher ground, NG Jayasimha of Humane Society International, which has rescued more than 100 animals, said.

In Thrissur alone, rescue workers found 200 cattle tethered in small sheds in people's homes before they were untied and taken to higher ground. 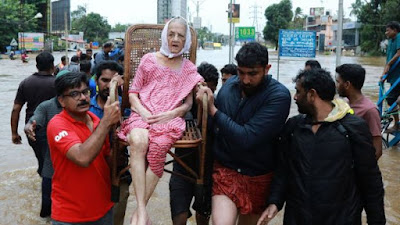 Kerala, according to one estimate, has a million dogs and a third of them are free roaming strays.

More than 23,000 people were bitten by dogs in 2015, and nearly half of them contracted rabies.

Animal rights groups had then complained that cash-strapped municipalities and irate citizens were poisoning, clubbing, beating, shooting and electrocuting strays to control their population.

But there's a genuine love for dogs in the state, contrary to public perception. Otherwise we wouldn't have found so many dogs in people's homes, said Mr Jayasimha.

More than 8,000 cattle, calves and buffaloes, 3,297 goats and 47 dogs have died in the floods, according to the government.

Floods in the southern Indian state of Kerala have killed more than 350 people since June.

The devastating floods in Kerala peaked last week. The monsoon rains have since begun to ease and rescue teams have been deployed, but thousands of people remain marooned.

The state should have been prepared for this, just a month earlier, a government report had warned that Kerala was the worst performer among southern Indian states in the effective management of water resources.

With 42 points, it was ranked number 12. The top three states were Gujarat in the west, Madhya Pradesh in the centre and Andhra Pradesh in the south, with scores of 79, 69 and 68 respectively.

A month down the line, Kerala seems to have confirmed the report's finding.

Officials and experts have said the floods in Kerala which has 44 rivers flowing through it would not have been so severe if authorities had gradually released water from at least 30 dams.

This could have been avoided if the dam operators had started releasing water in advance rather than waiting for dams to be filled up, when they have no alternative but to release water, said Himanshu Thakkar, a water expert at the South Asia Network on Dams, Rivers and People.

It was only when the floods peaked last week that water from more than 80 dams was released.

It is clear that major dams in the state like Idukki and Idamalayar only released water when Kerala was in the throes of heavy flooding, which actually proved to add further misery to the situation, Mr Thakkar said,

He added that dam operators had had sufficient time to release water when it was relatively dry, which could have helped prevent some of the damage.

An assessment by the federal government earlier this year found that Kerala was among the 10 states most vulnerable to flooding.

The state's administration is accused of not having taken the necessary steps to lower the flooding risk.

Experts say the federal government is also to blame because Kerala gets no early flood warning from the Central Water Commission (CWC), the only government agency authorised to do so.

The unprecedented floods and dam water releases also raise the questions about flood forecasting and advance action by the CWC, Mr Thakkar said.

We are shocked to find that the agency has absolutely no flood forecasting sites. It has only flood monitoring sites in Kerala, he added.

It's high time that the CWC includes some key dams like Idukki and Idamalayar and some key locations in its flood forecasting.

While the state has lagged behind on these preventive measures, the rainfall this monsoon season has been exceptionally high.

James Wilson, an adviser on water issues for the Kerala state government said it is a calamity that has happened after 100 years and no one had predicted this amount of rain. That's why there was no preparation for this level of disaster.

We have been managing floods every year, but this time it was extraordinarily extreme and that is why they were forced to release the waters of the dams.

Kerala recorded more than 37% excess rainfall in just two-and-a-half months, while in the past that has happened throughout the monsoon season which usually lasts about four months.

Such heavy rainfall in a short space of time also triggered landslides that killed many people. Environmentalists say deforestation is responsible for this.

Some parts of Kerala have been marooned because wetlands and lakes that acted as natural safeguards against floods have disappeared because of rampant urbanisation and construction of infrastructure.

Heavy rains in 2015 in the southern city of Chennai killed at least 70 people because of shoddy urban planning.

But experts say the havoc that floods have wreaked in Kerala this time has added another dimension to the disaster: danger from dams.

If they are not well managed and if rains continue to be erratic, as predicted by climate change scientists, a disaster of this scale is likely to occur more often than once in a century.