THAILAND: Sewage In Black Water Causes Authorities To Get Serious With Defaulting Hotels 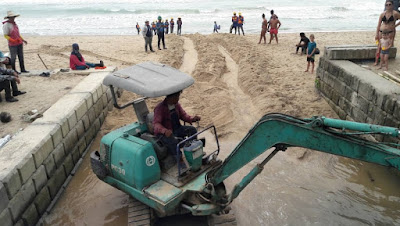 An outcry by local residents has caused Phuket officials into dredging a canal in Kamala, on Phuket’s west coast, that has turned stagnant with the black water reeking of the foul stench of sewage so it can flow freely into the sea.

Work began on clearing the canal, which empties directly onto Kamala Beach after the Phuket Provincial Office of the Ministry of Natural Resources and Environment (MNRE) and Kamala Tambon Administration Organisation (OrBorTor) received a slew of complaints through the Pineapple Eyes community Line Group.

The group acts a community watchdog for atrocious acts of pollution across the island.

An officer at the Phuket MNRE office, who asked not to be named said: We started the dredging from 2pm. The water in the canal stinks because there is nowhere for the water to go.

The officer said the work was being carried out in co-ordination with the Kamala OrBorTor and the Kathu District Office.

Kamala OrBorTor Deputy Chief Executive Nopporn Karuna said that previous attempts to clear the filthy canal had been made, but failed due to the heavy weather Phuket has been experiencing over the past two weeks due to the onslaught of the southwest monsoon.

We started to dredge the sewage out of canal on Aug 10, but we could not continue because of the weather. The monsoon season hit on that date, he said.

Mr Nopporn blamed businesses in the area for the foul condition of the water.

We are planing to inspect suspicious hotels in the area he said.

We are not sure where the dirty water came from, but we will have officials inspect the wastewater from hotels in the area, he said.