INDIA: Seashells Are A Hot Cake 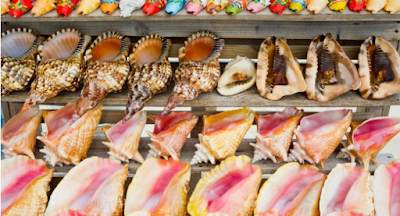 Harvesting seashells for crafts and souvenirs is a large-scale industry that involves many species. These conch, triton, and helmet shells are for sale at a souvenir stand in Turks and Caicos.

In the coastal town of Kanyakumari, in southern India, mountains of newly harvested mollusk shells living animals still inside them lie drying out near a sun-drenched beach.

Next up for these seashells: a dunking for a few hours in large vats of oil and acid to clean them. Any remaining flesh or scaly growth is then scraped off each shell by hand by one of hundreds of local workers, and they’re given another soaking in oil.

After a final hand-polishing, many are shipped to artisans in nearby towns who craft jewelry and other mementos to sell to tourists. The remaining shells are destined for elsewhere in India and abroad.

For many of the species found here, this industry is illegal under Indian law.

A witness says the mass collection and processing of mollusks in Kanyakumari firsthand in 2014, it’s cruel because the shells are very much alive.

The witness who visited Kanyakumari for his thesis project, which started as an inquiry into the livelihood of shell artisans and morphed into what he calls a framework for a movement against the exploitation and mindless destruction of marine life.

The witness had expected to speak with a few artisans and learn about their craft but was flabbergasted by what he saw.

A factory worker showed him around a processing center and a massive open warehouse with high gates and security.

As soon as we opened those tall gates, I could see truckloads, heap after heap of seashells everywhere as far as the eye could see and that really put things into perspective for me, he explains. That’s when the scale of this hit me in the face.

One worker told him that his facility processes anywhere from 30 to 100 tons of shells a month, and and the witness says, several other such facilities exist in southern India.

The dozens of shell species they handle range from the spider conch, a curved shell with long protrusions resembling spider legs, to the green turban, with its swirling emerald, white, and brown vertical layers.

Both species are listed under India’s Wildlife Protection Act and therefore illegal to harvest in the country.

The shells are packaged by the kilogram and sold to craftsmen as raw material for souvenirs and other handicraft products.

The supply chain varies from town to town. For example, shells may move from a factory in Kanyakumari to an artisan’s home or shop nearby.

In the case of less touristy towns such as Rameshwaram, he says, larger processing factories send their shells to middlemen who sell them to artisans in places like Kanyakumari.

Shells from Rameshwaram are also exported overseas or to larger Indian cities such as Vizag and Mumbai.

At least 50,000 mollusk species inhabit the Earth. Whereas some shells are harvested for their meat, others—like the chambered nautilus, known for its beautiful, coiled multi-colored protective casings—are collected solely for decorative purposes.

India is by no means the only major supplier. Local news reports from GMA News Online in the Philippines describe similar processes there for harvesting, cleaning, and distributing shells. Shells are also exploited commercially in Indonesia and throughout the Caribbean, among other places.

Only a few species, notably the queen conch, which can grow to a foot in length, the chambered nautilus, the giant clam, and a few species of snails—are protected under the Convention on International Trade in Endangered Species of Wild Fauna and Flora (CITES), the body that regulates the global wildlife trade.

To trade these species, importers must obtain a permit from the country of origin, which is registered in an international database. In addition, CITES requires that source countries set fishing quotas to ensure that trade in these species is sustainable.

Like India, a number of other countries have implemented their own policies to protect marine mollusks.

Despite these measures, according to a 2016 study by Defenders of Wildlife, a U.S.-based nonprofit, mollusk shells are one of the most heavily confiscated wildlife products at U.S. ports of entry.

Between 2005 and 2014, U.S. Fish and Wildlife Service agents confiscated 77 different types of wildlife products, and shells, with more than half a million seized, appeared in the top five.

Mollusk-derived shell products accounted for about 42 percent of all items. Failure to obtain an import permit—or attempting to import more items than allowed by a permit is a common reason for confiscation.

More than 90 percent of shell products seized by the Fish and Wildlife Service during that period were sourced from the wild, and nearly 99 percent were intended for commercial purposes. The Service defines the import of eight or more items to be commercial.

The queen conch—with its spiral, shiny pink and orange or cream shell that can measure up to foot long is one of the most recognizable protected mollusks.

According to a 2016 Defenders of Wildlife fact sheet, queen conches with no paperwork or improper paperwork accounted for more than 90 percent of all shells from Latin America that were confiscated by the Fish and Wildlife Service between 2005 and 2014.

Undocumented trade on such a scale, Goyenechea says, has the potential to put wild populations in jeopardy.

There’s an impact on the environment—it’s not the same to bring two shells as 1,000 shells, she says. When those myriad shells used for jewelry and decorative items like lamps and picture frames had living animals inside them in the ocean

They served a variety of ecological roles, including providing an anchorage for epiobonts like algae that provide food for marine life and for filter-feeding barnacles, which help clean the water.

The queen conch plays an important role in its ecosystem by helping cleanse the Caribbean’s waters and providing food for animals like the loggerhead sea turtle and nurse shark. Not to mention that scientists consider mollusks to be excellent indicators of overall ecosystem health.

Like any exploitation of the natural world, if you take out more from the environment than is sustainable, then that environment and the ecosystem collapse,says Neil Garrick-Maidment, executive director of The Seahorse Trust, an England-based nonprofit that has been working to bring awareness about the ill effects of the marine curio trade since 2015.

Shell fishermen in India often use a fishing technique similar to bottom trawling, which involves dragging a large net along the seafloor. When this is done, according to the Oceana, living habitat in its path is crushed, ripped up, or smothered as the seabed is turned over.

It’s unclear how widespread bottom trawling is in the global mollusk fishing industry.

The chambered nautilus, native to the South Pacific, is probably the mollusk most affected by the shell trade.

Little is known about this species, which was given CITES protection only as recently as 2017 and is especially vulnerable because unlike, say, giant clams, nautiluses can’t be bred in captivity to replenish diminishing wild populations.

According to a 2016 study by TRAFFIC and the World Wildlife Fund, global trafficking in nautiluses is still rampant. The study notes that the illegal trade has shifted from shops openly displaying them to Internet sales, which are harder to monitor and control.

The study also identifies the policing of the chambered nautilus trade in China, the Philippines, and Indonesia as a particular challenge.

CITES is only as strong as its member countries’ ability to enforce its protections says U.S. Fish and Wildlife Service spokeswoman Laury Parramore, adding that the Service works with foreign governments and other partners to build expertise, knowledge, and resources to properly implement CITES.

In India, the Wildlife Protection Act aims to safeguard a handful of increasingly rare mollusk species, such as the scorpion conch and the trapezium horse conch.

Enforcement is haphazard, and protected shells are sold openly on beaches to consumers and artisans, while others are exported across the globe.

Lack of information makes it harder for officials to stop the trade in even the endangered shell varieties. This is compounded by the fact that port authorities don't really understand or acknowledge this as a problem. To them it's just raw material.

Identifying mollusk species is one of the toughest challenges in policing the international trade in seashells.

During the customs process, importers often simply list their goods as shells, and the few inspectors at most ports of entry are expert enough to identify protected species.

The 2016 TRAFFIC and World Wildlife Fund study, which focused on nautilus shells, backs up this assertion. It notes that in Europe, China, Hong Kong, and Taiwan, shells have the same species or genus customs codes as coral and other mollusks, crustaceans, and echinoderms and that monitoring the mollusk trade in this case nautilus shells, isn’t a priority for authorities.

The absence of customs codes to track international trade, and the absence of market measures to ensure that the trade is legal mask the overall volume of harvest and trade that is occurring.

Securing funding for less flashy wildlife species is very difficult. Mollusks and other marine curios like seahorses don’t have the same appeal as elephants, tigers, and pandas, as a result, it’s therefore hard to get those in power to take notice.

What’s crucially needed is to reduce demand for decorative shells and other trinkets by spreading awareness among consumers of the dangers of over exploiting mollusks.

This goes beyond just one animal or one species. It’s just about being aware of what it takes for a natural resource to be pulled out from its habitat only to end up inside a living room, especially if the exploitation is based on unchecked and unethical practices just so you can buy an object from a shop.

People who want to buy shell products ask shop owners where they came from. If an item’s origin isn’t known, she urges not buying it.

I think that one of the most important things is people don’t have information about where the product is actually coming from and how it might be harming the species and the environment.

People may mistakenly think that someone just gathered shells lying on a beach, rather than that they’d been obtained as part of an industrial-scale enterprise.

Wildlife belongs in the wild.