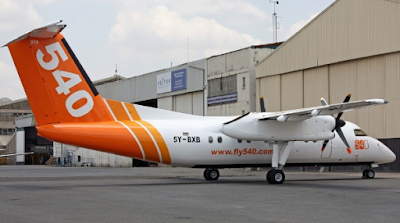 South Sudan has stopped operations of Fly540 at Juba airport over allegedly dubious landing fees, leaving travellers with only two direct flights between Nairobi and Juba.

On August 14 a Fly540 flight with 40 passengers on board left Nairobi for Juba at 4:45pmw was denied landing at Juba Airport.

With a flight time of one hour and 35 minutes, the passengers expected to land at 6:20pm. But this was not allowed.

Within half an hour into the flight, the pilot was informed by the airline’s Juba airport manager that he no longer had landing rights, forcing him to fly back to Nairobi.

We were surprised when the airline had to turn back almost half an hour into the flight. We were told that the South Sudan government had denied it entry.

Passengers were told that the airline had cancelled all its flights to Juba, hence our refunds would be processed given that the airline staff could not tell when they would be getting back the landing rights.

Funny enough, Fly540 staff South Sudan government had cancelled the landing rights for the carrier earlier that day, over what it called accumulated landing fees.

It is now two weeks since the airline suspended its operations in Juba.

The Fly540 Juba airport manager only discovered this cancellation when he went to file the flight plan with Juba’s civil aviation authority.

He learned that the authority’s director-general had issued an internal memo suspending the airline's landing rights.

The cancellation of landing rights was as a result of the management of Fly540, South Sudan’s national security intelligence, the Ministry of Interior and the civil aviation agency fighting since April.

As a consequence some of the civil aviation agency's staff members were suspended from work and arrested.

This investigation continued and the airline complied with the instructions.

However, the suspended staff from the aviation authority kept threatening the airline's Juba staff, which saw it seek protection services from South Sudan police.

On August 7, the Fly540 management was surprised to receive a letter from Juba's Intelligence agency (NISS) requesting payment of $27,000.

The letter asked that the money be given to some of the Intelligence agency employees who were in Nairobi on assignment.

The Fly540 management asked for a letter from the civil aviation agency to support the request.

This was, however, met with another demand letter now from South Sudan’s Interior Ministry on the same day, demanding payment of the full arrears, which had accrued to $123, 000.

The Fly540 management offered a payment plan, but this was declined.

An agreement was reached that the airline would pay $50,000 upfront and the Juba office released $28,300 to the South Sudanese officials, upon which the staff members were released, with a promise to pay the balance in cash via a flight from Nairobi.

The Fly540 flight, which was turned away on Tuesday last week, had the balance on board.

The matter of fraud is still under investigation. The airline has no problem settling the arrears but is questioning the process because it is being faced with funny and unofficial requests from different agencies.

It is something the Kenyan government and embassies are well aware of and are trying to resolve, a source with knowledge of the matter said.

It is understood that Fly540 and the Juba civil aviation agency have been in discussions since the suspension but nothing concrete has come out of the discussions.

The Kenya Civil Aviation Authority director general, Captain Gilbert Kibe, confirmed that his office was aware of the matter.

Yes this is something that has been brought to my attention and we are investigating the issues Fly540 are having. I don’t think I will comment beyond that, Captain Kibe said.

William Mwadime, a Kenyan consular official at the Kenyan Embassy in Juba confirmed that his office had reached out to the Juba authorities to try to resolve the matter.

We had an informal session with Fly540 Juba management over the issue in the week of their flight suspension. We told them to file a formal letter on their concerns, which they did on Thursday.

This was then shared with the Juba authorities and we expect feedback from them on Tuesday, Mr Mwadime said.

South Sudan, however, maintain that the decision to cancel landing rights was taken after the airline went into default on the payment of its landing fees, which according to Juba authorities had accumulated significantly.

You can seek the amount and default period from the airline management. What we want is these unpaid fees settled so that they can continue with their normal frequencies to Juba, an official at the South Sudan Civil Aviation Authority, who requested anonymity said.

Fly540, which operates two daily flights to Juba, suspended its services in July 2016 when the fresh fighting broke out, citing the deteriorating security situation.

The Nairobi-Juba route is now served by two daily direct flights by Kenya Airways, with RwandAir making a stop-over at Entebbe and Ethiopian Airline going through Addis Ababa.

Five Forty Aviation Ltd, trading as Fly540, is a low-cost airline which commenced operations in 2006 and is based in Nairobi, Kenya, that operates domestic and international passenger and freight services.

The airline's name refers to its price of Sh5,540 per adult return fare between the above-mentioned cities.

Lonrho Africa was a major investor in the company, paying US $1.5 million for a 49% stake.

In May 2007 the airline introduced two de Havilland Canada Dash 8-100 aircraft to increase the airline's capacity, allowing it to develop new domestic routes.

The original scheduled flights included freight and passenger services between Nairobi and Mombasa, while Kisumu became a destination in January 2007.

Daily flights on the Nairobi-Malindi-Lamu route were added to its domestic services in February 2007.

International operations commenced in October 2007 with flights to Juba in South Sudan and Goma in the Democratic Republic of the Congo, Entebbe in Uganda was added in February 2008.

It was planned to expand the Nairobi hub's destinations to Rwanda, Mozambique and Burundi in 2009. The company's ambition was to become a pan-African carrier, through an expansion to an additional two regional hubs:

Fly540 said they will open up Kigali and then head to West Africa. Ghana will be the hub for West African region. In Southern Africa, we shall use Angola as our hub, so it will become a pan African low cost airline.

Fly540 received authorisation to start operations in Angola in April 2009. The initial plans include domestic flights to Cabinda, Luanda, Soyo, Benguela, Huambo and Malanje, but an expansion within the region will take place as soon as the domestic market has proven its success.

In June 2009, it was reported that Fly540 was working to set up a regional franchise in Zimbabwe.

Fly540 Tanzania launched direct flights between Dar es Salaam and Mwanza, on the western shores of Lake Victoria. Initially the company operated 11 flights a week and it was hoped that in time its Fokker 28 aircraft, which carrie 28 people, would be upgraded to a 50-seater CRJ 100.

In 2015 Fly540 Ghana that had been suspended in May 2014 was sold by former owner Fastjet, to UK-based DWG-G and is due to resume operations as Royal Fly540.

Rubicon said it had chosen to acquire Fly540 as its platform for the launch of a budget airline in Africa, to be modelled on Europe's second largest low cost carrier EasyJet.

The first flights were transferred to the new airline, Fastjet, from 29 November 2012. These were two domestic routes in Tanzania.

It had been expected that all Fly540 flights would quickly be transferred to Fastjet, in turn, as the various arrangements and permissions required for each route are agreed.

Following the acquisition of Lonrho's 49% interest in Five Forty Aviation Ltd, and a further 49.98% economic interest in the company approved at a Fastjet General meeting on 29 June 2012 and completed on 2 July 2012, it became apparent that the vendor did not consider the additional acquisition had completed.

The dispute led to legal claims by both parties over the ownership and other matters.

A Memorandum of Understanding was reached on 23 April 2013 where both parties agreed to stop legal proceedings against each other, but because Fastjet now considered they did not have control or significant influence, Five Forty Aviation Ltd has since been treated as an investment in their accounts.

The Fly540 operations in Tanzania, Angola and Ghana, however, are fully incorporated within Fastjet's accounts.

Since the acquisition of Lonrho (BVI) Ltd's interest on 29 June 2012, Fastjet has owned 49% of Five Forty Aviation Ltd.

All three crew members died. The aircraft was said to be carrying a shipment of khat. The aircraft had departed from Wilson Airport in Nairobi.

On January 27, 2011, a Fokker 27 plane on test flight departing Wilson Airport failed to take off and ran through the perimeter fence into a maize field. The plane had four persons on board, and no injuries resulted.