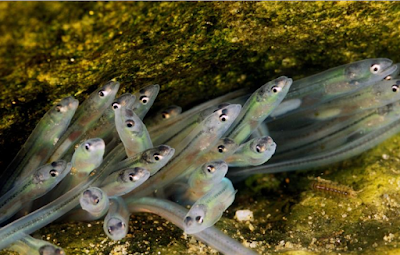 Tommy Zhou said he’d buy black market eels as long as nobody developed a big mouth, and if anyone did double-cross him, he’d pay $200,000 to have him killed, according to undercover agents who arrested Zhou.

He was among more than 20 other people ranging from small fishermen to powerful businessmen recently snagged in a multi-state wildlife trafficking investigation named Operation Broken Glass.

The dealers were laundering eels buying them illegally, then mixing them with legal ones and actively smuggling them using false labels, said U.S. Fish and Wildlife special agent Eric Holmes, who posed as a poacher selling to Zhou.

Poaching all along the East Coast was very sophisticated, he said.

They used night vision and rental vehicles, and they could drop a crew in the middle of the night without making any noise.

As long as these poachers had the opportunity to sell to a dealer willing to buy illegal eels, they were unstoppable.

The run on American eels, Anguilla rostrata, was sparked by a sushi crisis that began in 2010.

Wild baby eels, also known as glass eels or elvers, acquired to seed giant aquaculture farms in China and elsewhere were becoming scarce putting supplies of unagi, eel grilled with soy sauce and served at sushi joints around the world, in danger.

Asia’s eels had already been largely depleted when the European Union announced that it was putting a ban on exports of European eel species to stem a precipitous population decline.

Some small fishermen who previously were scraping by digging clams and worms suddenly earned enough cash in the span of an 11-week eel season to pay off their houses and buy new trucks.

Maine fishermen tell stories of those gold rush days when they could catch as many eels as they liked and dealers would park along the riverbanks waiting to dole out thousands of dollars in cash.

With so much money at stake, the eel business was ripe for robberies, and dealers started carrying side arms for protection.

At the same time some saw an opportunity to make even more money by trafficking eels across state lines and ultimately to Asia, violating the U.S. smuggling law known as the Lacey Act.

One of the kingpins was a Maine dealer named Bill Sheldon, who years earlier had taught fellow fishermen how to catch the tiny translucent elvers swimming upstream by moonlight.

Even though eel prices were sometimes as low as $30 per pound, elver fishing provided another source of income for locals cobbling together a living.

When eel prices spiked, Sheldon was in a prime position to cash in.

Court records show that Sheldon worked with a network of elver fishermen and dealers up and down the East Coast to smuggle eels to Asia.

In a factual statement accompanying his guilty plea last October, Sheldon admitted to trafficking nearly $500,000 worth of eels and to taking steps to evade the police.

He is now serving six months in a New Hampshire prison, and he was ordered to pay a $10,000 fine.

If he hadn’t already sold his truck with the license plate EELWGN, the judge would have required him to forfeit it.

As a substitute, Sheldon paid the value: $33,200. In addition, he was ordered to serve a three-year period of supervised release on condition that he not possess a license to purchase or export eels.

Thirteen lower level poachers received one to two years’ probation and a fine. Three additional men have been indicted for eel trafficking in multiple states and are awaiting trials.

When you have an industry that’s this lucrative, there are always going to be people who want to take advantage of the resource, Barnum said.

We caught a lot of people, but there will always be more we’re not going to stop paying attention.

In response to the eel rush that began in 2012 and concerns about the resource’s sustainability, the Atlantic States Marine Fisheries Commission, which coordinates the conservation and management of many fish populations along the East Coast, started tightening fishing restrictions in Maine.

In 2014 the commission instituted a state quota—11,749 pounds of eels, which was reduced to 9,688 pounds in 2015. Under the quota system, each fisherman has an allowable take based on the average of his or her past eel landings.

Every time a fisherman sells eels, the tally is tracked with a swipe card that logs information such as the weight of eels caught and their location into a government database.

Also, dealers are no longer allowed to pay cash only checks which makes the transactions traceable.

The system appeared to be working until this year, when Maine law enforcement investigators discovered that some dealers were making off-the-book transactions in cash eel prices had reached an all-time high of nearly $3,000 per pound.

The investigators determined that the illicit activity was so prolific that it would likely put the state beyond its quota.

Patrick Keliher, commissioner of the Maine Department of Marine Resources, made an emergency ruling to close the fishery this year on May 24, two weeks earlier than usual.

The commissioner made the decision that he didn’t want us to go over the state’s quota, Marine Patrol Major Rene Cloutier said.

It appeared that we were getting close.

The decision to close early came at a pivotal time. In August, the Atlantic States Marine Fisheries Commission is scheduled to consider an addendum to increase Maine’s current state quota to the 2014 level, an 8 percent hike.

Now people are questioning whether the commission will instead shut down the fishery, as almost every other East Coast state that has a commercial eel fisher has done.

Shutting down the fishery would be off the Richter scale, said Darrell Young, co-director of the Maine Elver Fishermen Association.

Cloutier said it would be a shame if it comes to that. Before we instituted the swipe card, it was chaos—there’s no way we’d still be fishing if we hadn’t proved that we were serious about protecting the resource.

I’m really disappointed in the people who took advantage of the system. It’s disheartening.