THAILAND: Another Chinese Tourist Drowns At Koh Racha Yai In Less Than 48 Hours Of Arrival In Phuket 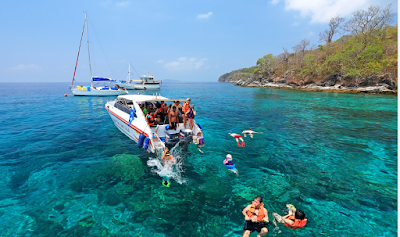 A 32-year-old Chinese tourist drowned at Koh Racha Yai Aug 19 in less than 48 hours after arriving in Phuket on holiday with his family.

Capt Somkiet Sarasin of the Chalong Police was informed at 1:40pm that Zhang Guojun, from Beijing, had been pulled from the sea at the main beach on Koh Racha Yai.

Attempts to revive Mr Zhang on the beach failed, yet rescue workers continued their efforts while rushing him back to Chalong Pier by speedboat, but he was pronounced dead on arrival.

Mr Zhang arrived in Phuket on holiday with his family on Aug 17 and checked in at the Ban Raya hotel on Koh Racha on Saturday, police confirmed.

The family had scheduled to check out from the hotel yesterday and was to board their return flight home Aug 23.

While waiting to board their boat to return to Phuket, all four members of the Zhang family entered the water to swim despite red no swimming flags posted on the beach, police noted in their report.

All four were soon in dire need of assistance in the strong surf.

Three members of the family were rescued safely, but Mr Zhang was already unconscious and unresponsive when pulled from the water, police said.

Chinese consular officials have been notified of Mr Zhang’s death, Capt Somkiet confirmed in his report.