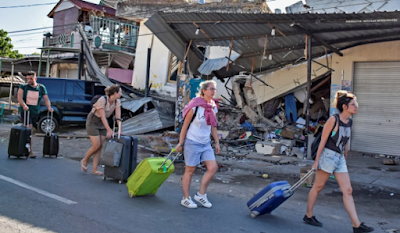 Summer 2018 has been an eventful one, not least for some of Southeast Asia’s top tourist destinations, which have endured more than their fair share of tragedy and turmoil.

On August 5, the Indonesian island of Lombok was hit by a second deadly earthquake in less than a week, this one killing at least 108 people, and sparking a desperate search for survivors and a mass exodus of tourists.

That followed the Phoenix boat disaster on July 5, in Phuket, in which 47 Chinese nationals lost their lives.

In the wake of the accident, as many as 600,000 Chinese tourists cancelled July trips to Thailand.

According to the country’s Ministry of Tourism and Sports, this represents a 37-billion-baht (US$1.1 billion) loss of revenue and a 26 per cent reduction in arrivals from China, compared with the same period last year.

Officials predict the downturn to continue throughout August, with as many as 930,000 Chinese visitors staying away, although many have suggested it could have been worse.

Coverage of the tragedy was largely eclipsed by the feel good story of the summer, the Tham Luang cave rescue.

Elsewhere in Thailand, the closure of Maya Bay on June led to a dramatic decline in tourism revenues at Nopparat Thara Beach-Phi Phi Islands National Park, in Krabi province.

The Department of National Parks, Wildlife and Plant Conservation (DNP) estimates a loss of almost 57 million baht from June to July.

DNP deputy chief Jongklai Worapongsathorn said, We are not too concerned as we have made it our priority to rehabilitate the bay’s ecosystem.

In an effort to alleviate the environmental pressures placed on the beach by the influx of tourist boats it received prior to closing, the DNP is building a jetty that is expected to be completed by the time the bay reopens on October 1, with the hope that tourists and the revenues they bring return.

Despite revising downwards its forecast number of Chinese tourist arrivals for the second half of 2018 by almost 670,000, to 5.1 million, the Ministry of Tourism and Sports is working hard to ensure that its top tourist market rebounds in time for China’s golden week holiday, from October 1 to 7.

It is not all doom and gloom in the Philippines, where popular island destination Boracay has been closed since April 26.

According to Department of Trade and Industry figures, tourist arrivals rose by more than 10 per cent, to 3.2 million, from January to May.

Lance Gokongwei, president and chief executive of airline Cebu Pacific said: Even with the closure of Boracay, we’re seeing tremendous growth in tourism.

We saw an opportunity to redeploy the aircraft flying to Boracay to additional destinations, such as Busuanga, Siargao and Negros Oriental.

Those that are not quite in the limelight like Boracay, they suddenly sprouted. And I think it’s good because it’s creating opportunity to build more legs to our tourism strategy.

Not only Boracay and Cebu, said Gokongwei. Now there’s four or five jewels.

Earlier this year, Lombok was identified by Indonesian authorities as being one of 10 destinations that could replicate the success of its neighbour, the hugely popular Bali, which, let’s not forget, has its own worries, the highly active Mount Agung keeping volcano watchers and other local officials on their toes.

As it has transpired, the impact of both the quake and the mass evacuation of tourists on the lives and livelihoods of inhabitants of the increasingly popular Lombok are likely to be felt for some time.