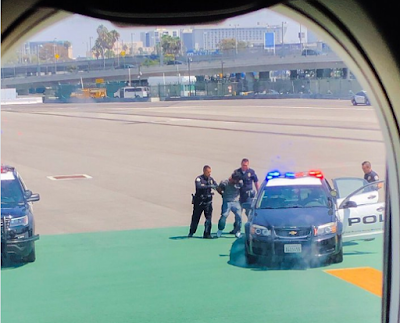 Los Angeles International Airport police took a man into custody after he scaled a fence and approached a Delta airplane as it prepared to depart, officials said.

The man scaled an outer perimeter fence near Lincoln and Sepulveda boulevards Monday shortly after 2 p.m.

Officers spotted the man climb the fence and took him into custody as he appeared to be getting closer to a Delta plane that was staging for departure.

A passenger on the Delta flight said it appeared the man was doing pushups before he was apprehended.

He got underneath the plane. He was jumping up, trying to touch the wings.

He ran to the other side of the plane, was touching the engines. He got down on the ground, started doing some push-ups. By that time, all the police and security got down on him.

Police said Aguilar appears to be a transient with mental health issues. Aguilar was booked for trespassing.

He will receive a mental health evaluation when he is released by police.