Snorkelling on the coral reefs at Pigeon Island National Park is absolutely fantastic wherever you are on the islands.

But the main attraction is the island’s many juvenile and adult blacktip reef sharks.

These sharks are up to five feet long and are reliably seen in an area next to the larger of the two islands, known as Shark Point Reef.

This nonaggressive species seems to be quite accepting of humans in the water, and snorkelers have an almost guaranteed opportunity to see them—sometimes as close as a couple meters away in water as shallow as a meter deep.

It is one of the few places where totally inexperienced snorkelers can have as good a chance of a shark encounter as fully qualified scuba divers.

Pigeon Island National Park actually consists of two islands: large and small. It is a marine national park in Sri Lanka located in the general area of the city of Trincomalee and contains some of the best remaining coral reefs of Sri Lanka.

Many of the 100 species of corals and 300 coral reef fishes recorded around the area are found in this national park.

The coral reef is visited by Hawkesbill Turtle, Green Turtle and Olive Ridley Turtle and the island is important breeding ground for the rock pigeon. The area was badly affected by the Indian Ocean Tsunami in 2004 but has now largely recovered. 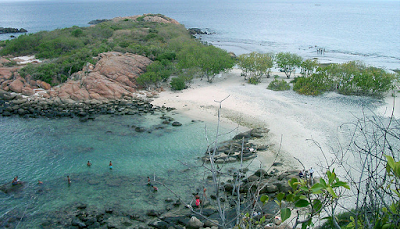 Pigeon Island National Park is one of the two marine national parks of Sri Lanka. The national park is situated 1 km off the coast of Nilaveli, a coastal town in Eastern Province, encompassing a total area of 471.429 hectares.

The island's name derives from the rock pigeon which has colonized it. The national park contains some of the best remaining coral reefs of Sri Lanka.

The island was used as a shooting range during the colonial era. Pigeon Island is one of the several protected areas affected by the Indian Ocean tsunami in 2004.

Its highest point is 44.8 m above mean sea level. The small pigeon island is surrounded by rocky islets. The national park is situated within the dry zone of Sri Lanka.

The mean annual temperature is around 27.0 °C (80.6 °F). The annual rainfall ranges between 1,000–1,700 millimetres (39–67 in) while most of the rain is received during the North-eastern monsoon season from October to March.

The large pigeon island's coral reef fauna is dominated by Acropora spp. with some Montipora spp. Faviidae, Mussidae and Poritidae species dominate the coral reef around the rocky islets.

Areas with soft corals such as Sinularia, Lobophyton, and Sarcophyton can also be observed. The coral reef harbors many vertebrates and invertebrates.

Many of the 100 species of corals and 300 coral reef fishes recorded around the Trincomalee area are found in the national park. Juvenile and adult blacktip reef shark are seen around the shallow coral areas.

Hawksbill turtle, green turtle and olive ridley are the visiting sea turtles of the coral reef. The island is important breeding ground for the rock pigeon.

Fishing and ornamental fish collection are the main economic usages of the coral reef. The pigeon island is also used as a scuba diving site.

Uncontrolled tourism has resulted in reef degradation and loss of biodiversity and fish density. Scientific research was hindered due to the civil war in the past two decades.

A proposed pier between the mainland coast and the island has attracted criticism.