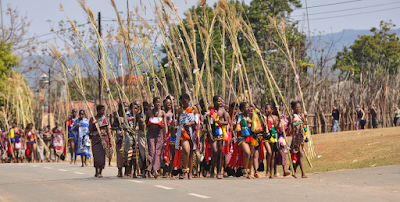 The dates the biggest cultural event in Eswatini (formerly Swaziland) have been announced and a hive of colourful activity will soon descend upon the country in the form of the festival known as ‘Umhlanga’ or Reed Dance.

The Festival is set to start on the 28th of August, with the main day (Day 7) set to take place on Monday 3rd September.

It will be on this day when the main ceremony occurs, with the dancing attended by the King signalling a public holiday in Eswatini.

This ceremony is an amazing spectacle and a centuries-old tradition where the Kingdom’s unmarried and childless females present their newly cut reed to the Queen Mother to protect her residence.

The King sometimes makes use of the occasion to publicly court a prospective fiancée or Liphovela.

When the main day arrives, young women from all over Eswatini and beyond her borders converge on the royal residence in Ludzidzini for this momentous occasion.

Maidens gather in groups and head out along riverbanks to cut and collect tall reeds, bind them and return to Ludzidzini, the Royal Homestead in Lobamba.

Tens of thousands of maidens, led by Swazi princesses, provide a sea of colour as they dance and sing, proudly carrying their cut reeds. Traditionally, virginity is a pre-requisite for participation as it is considered taboo for an ‘impure’ woman to cut the reed.

Residents of this tiny mountainous Kingdom are intensely proud of their deep culture and taking part in the Festival is a proud and privileged moment for all the family.

The highlight of the event is the reed-giving ceremony – one of Africa’s largest and most colourful cultural spectacles.

The maidens gather at Ludzidzini dressed in traditional attire; bright short beaded skirts with colourful sashes revealing their bare breasts to dance and sing and celebrate the unification of the Kingdom’s women.

His Majesty King Mswati lll joins the celebrations to pay tribute to the maidens.

At the end of the day, the maidens present their cut reeds to the Queen Mother, Ndlovukazi, and the protective Guma (reed fence) around her homestead will be rebuilt.

The Umhlanga Festival is a visual spectacle that bonds this small but perfectly formed nation. Its ever- increasing popularity defies the apparent decline of traditional cultures elsewhere in Africa.

Witnessing this festival is a truly unique experience. Visitors are welcome, but are vastly outnumbered by the participants! This is a traditional event that allows spectators, not one that exists for spectators.

See it for yourself and experience Eswatini’s unique blend of ancient culture, pristine wilderness, year round wildlife and spirit of adventure!

This is Eswatini’s best known cultural event, and has a more open feel than the Incwala. In this eight-day ceremony, young girls cut reeds, present them to the Queen Mother (Indlovukazi) – ostensibly to repair the windbreak around her royal residence – and then dance in celebration.

Up to 40,000 girls take part, dressed up in brightly coloured attired – making it one of the biggest and most spectacular cultural events in Africa.

The proper festivities kick off on day six, when dancing gets under way in the afternoon.

Each group drops their reeds outside the Queen Mother’s quarters then moves to the main arena, where they dance and sing their songs. The dancing continues on day seven, when the king is present. This is the main day that most visitors attend. Each regiment dances before him in turn.

Little can prepare you for the sheer scale of the pageantry, with column upon column of girls advancing like vast ululating centipedes across the parade grounds of Ludzidzini, each dissolving in turn into the pulsating mass of bodies around the royal kraal.

Up close, it’s an almost overwhelming immersion in noise and colour, as the girls stamp, sing and sway in step, anklets rattling, naked flesh and dazzling costume blurring into a living, chanting kaleidoscope.

The warrior escorts, adorned with cow tails and clutching knob-stick and shield, are sternly intent on their duties and seem contemptuous of tourists, but the girls are all smiles.

It’s Eswatini’s biggest holiday and, after days of tramping the hillsides, cutting reeds and camping out, they’re determined to party.

Today the Umhlanga is as well attended as ever. Indeed cultural historians marvel at how its ever-increasing popularity in Eswatini defies the apparent decline of traditional culture elsewhere.

It offers the visitor a unique experience. There are no special visitor arrangements – except for a special grandstand to accommodate visiting dignitaries – but simply turn up at Ludzidizini and follow the crowds (Day 7 is the main day).

Police will direct you where to go, and where to park.

The event takes place around the last week of August / first week of September in the Lobamba area, next to the Ezulwini Valley. The dates for the event are released relatively close to the time as they derive from ancestral astrology.

The dates for the 2018 Reed Dance have now been officially announced. The main day is always a Monday, which becomes a public holiday. This year, main day will fall on Monday 3rd September.

Tourists visiting the annual Reed Dance are allowed to take photographs on Days 6 and 7 (main day) – as the maidens walk to deliver the reeds to the Royal Residence, and then as they dance in the main arena.

Photography at other times is restricted to accredited members of the media, who can check the Media Accreditation section on this page for further information.

- The girls gather at the Queen Mother’s royal village. Today this is at Ludzidzini, in Sobhuza’s time it was at Lobamba.

- They come in groups from the 200 or so chiefdoms and are registered for security.

- Men, usually four, supervise them, appointed chiefs. They sleep in the huts of relatives in the village or in classrooms of nearby schools.

- This is a very exciting time for the maidens.

- In the afternoon, they march to the reed-beds with their supervisors. The older girls often march about 30 kilometers, while the younger girls march about ten kilometers.

- If the older girls are sent further, government will provide trucks for their transport.

- The girls cut their reeds, usually about ten to twenty, using long knives.

- Each girl ties her reeds into a bundle.

- Nowadays they use strips of plastic for the tying, but those mindful of tradition will still cut grass and plaint it into rope.

- In the afternoon, the girls set off to return to the Queen Mother’s village, carrying their bundles of reeds. Again they return at night. This is done to show they traveled a long way.

- A day of rest where the girls make final preparations to their hair and dancing costumes.

- After all that walking, who doesn’t deserve a little pampering?

- First day of dancing, from about three to five in the afternoon.

- The girls drop their reeds outside the Queen Mother’s quarters.

- They move to the arena and dance, keeping their groups and each group singing different songs at the same time.

- Second and last day of dancing. His Majesty the King will be present.

- King commands that a number of cattle perhaps 20 -25 be slaughtered for the girls.

- They receive pieces of meat and go home.