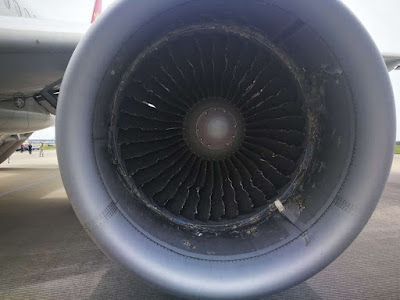 On 28 August, a Capital Airlines Airbus A320 (B-6952) suffered severe damage on nose gear and left hand engine during a hard landing at Macau Airport.

Flight JD5759 was scheduled from Beijing International Airport to Macau but during the approach – the weather at Macau at the time of landing consisted of rain and wind with gusts up to 30 knots – the aircraft hit the runway very hard.

One of the gears that got detached, hit the left hand engine.

Due to the failure of the communication system and a lack of satellite phone, the aircraft was communicating with the ground using the ACARS onboard.

After declaring an emergency (Mayday), the pilots entered a holding pattern Northeast from the airport and then decided to divert to Shenzhen Airport.

On approach the pilots first did a low pass over the field for a visual check on the landing gears.

Beijing Capital Airlines confirmed the accident, in total, there were 166 passengers and 9 crew members on board.

On Sunday, another company Airbus A320 aircraft had a decompression, forcing the pilots to descend rapidly.