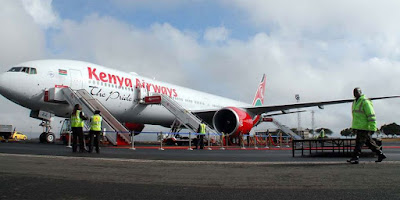 A total of 115 engineers and technicians of Kenya Airways have suffered a blow after the Court of Appeal ruled that their reinstatement was wrong.

The court said that Justice Hellen Wasilwa’s order, which temporarily reinstated the staff, was without merit because the employees did not demonstrate special circumstances for reinstatement.

We reiterate that in our view, without hearing the parties and or in the absence of the appellant’s response to the motion, there is no way the court could have determined that special circumstances existed for the issuance of a mandatory injunction.

The special circumstances, if at all, had not been demonstrated, Justices William Ouko, Kathurima M’Inoti and Fatuma Sichale said.

The judges also agreed with airline lawyer Githu Muigai that Ms Wasilwa unilaterally took it upon herself, without expert evidence, to determine issues of safety of air travel.

Joseph Otieno Oyuga and 114 others moved to court in December 2017, after the airline fired engineers and technicians over what it called an illegal strike.

The striking workers were fired after they ignored three written requests to resume work.

Technical assistants were demanding a 70 per cent increase in basic pay while control and production engineers wanted a 250 per cent pay hike.

When they appeared before the Employment and Labour Relations Court after the sacking, Kenya Airways asked for case adjournment for a day to enable them file a response.

The judge granted the application and went ahead to temporarily reinstate the sacked employees due to sensitivity of the issues involving the aircraft and security of human lives.

The decision did not please the airline forcing it to file an appeal.

According to Prof Muigai, the judge erred by issuing an injunctive order, benefiting the employees yet there was no evidence and no sufficient evidence to support the application for an injunction.