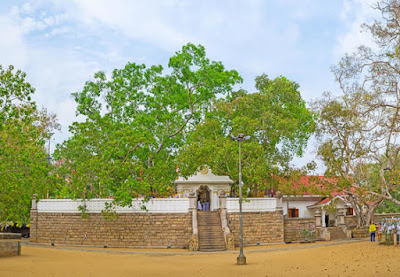 The Jaya Sri Maha Bodhi is a sacred fig tree, or Ficus religiosa, that stands in the Mahamewna Gardens in Anuradhapura, Sri Lanka.

Not only is it the closest authentic living link to Gautama Buddha, it is also the oldest human-planted tree in the world with a known planting date and a recorded history.

This sacred fig tree with a link to the Buddha is one of the oldest human-planted trees in the world.

About 2,600 years ago, Lord Gautama Buddha sat with his back against an Esathu tree on the banks of the Neranjana River in Bodhgaya, India.

It was at this moment, as he sat against the tree, that the Buddha is said to have achieved enlightenment. In doing so, the tree also gained a venerated status. It became known as the Bodhi tree, and pilgrims came to see it even within the lifetime of the Buddha.

Later, in 236 BC, the Buddhist nun Sanghamitta Maha Theri was sent by the Emperor Asoka from India to Sri Lanka.

With her she carried a southern branch of the original sacred fig. This branch was ceremoniously presented to Devanampiya Tissa, one of the earliest kings of Sri Lanka whose reign was notable for the arrival of Buddhism.

In 288 BC, Tissa planted the branch of the Bodhi tree in his Royal Park in Anuradhapura.

The Jaya Sri Maha Bodhi, as it became known, has since been cared for and protected by Buddhist monks and dedicated kings.

Statues, water canals, golden fences, and walls have been built around the tree over the centuries, and many vows and offerings have been made by Buddhists at the foot of the sacred fig.

At times the tree has faced serious threats, and not only from wild elephants. Two storms in 1907 and 1911 resulted in broken branches.

A vandal attacked the tree in 1929, hacking off another branch. And then, in 1985, Tamil Tiger separatists stormed the site and massacred 146 Sinhales-Buddhists on the upper terrace.

The Jaya Sri Maha Bodhi, however, remains standing, as revered as ever. And for as long as it continues to thrive, it will remain the oldest cultivated tree in the world with a documented written history.

The Jaya Sri Maha Bodhi is located within the ancient Mahamewna Gardens, which were created by King Mutasiva (367 - 307 BC).

Other attractions inside the gardens include the Samadhi Statue of the Buddha and a handful of stupas.

The gardens are open for all ages and nationalities, religious or otherwise.