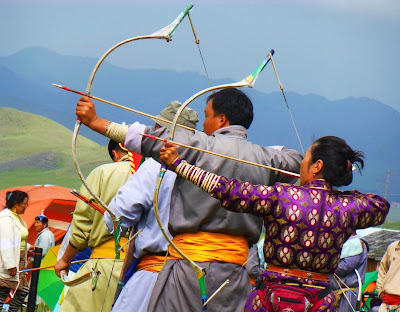 According to Mongolian Buddhism, a spot in the middle of the Gobi desert is where the strongest spiritual energy in the world converges. To mark the location, the monastery complex was built in the 19th century, Khamriin Khiid.

The original Khamriin Khiid monastery was founded in 1820 by Danzanravjaa, known as the Terrible Noble Saint of the Gobi, who observed the location’s tremendous energy. At its peak, the monastery housed up to 500 monks, and included more than 80 temples within the complex.

Danzanravjaa was a great scholar and practitioner of the arts, as well as a social reformer.

He set up a theater at the monastery for people to develop their singing and acting skills, and a public school, which encouraged education for both men and women.

The lively and productive monastery was destroyed in 1937, in the wake of the Communist purge against religions, and Khamriin Khiid in its current form was reconstructed in 1990.

Today, hundreds of pilgrims visit the site every day at dawn to benefit from the spiritual energy that is believed to radiate as a new day is born.

Shambala, the centerpiece of the complex, is surrounded by 108 stupas, encircling other holy monuments and temples, the most prominent of which has a large pair of eyes staring at visitors.

The enclosed space is said to be warmer due to the energy that emanates from Shambala, and it is not uncommon to see pilgrims taking off their shoes to better absorb the energy.

Another form of worship is the throwing of rice, millet, milk and vodka on monuments. Other visitors walk around singing a song composed for Khamriin Khiid.

Outside the enclosure are the series of caves where Danzanravjaa and other monks meditated for 108 days, two huge breast-shaped mounds covered in milk, a wind-activated bell, and the actual monastery.

Mongolia is known as the land of blue skies, boasting vast and dramatic landscapes, from its sand dunes and alpine forests to its famous steppe that stretches toward never-ending horizons.

Go explore unique national parks and a historic sporting festival—by road, on foot, and even on camel and horseback.

On this remote adventure, we'll be charting a path across large swaths of Mongolia's striking terrain. Along the way, you'll have the chance to visit with nomadic families and dive into the complicated history of the Mongol Empire.

The journey will culminate with the annual Naadam Festival among thousands of other spectators, observing physical feats that pay tribute to Mongolia's warring history.

Your small group of 10 to 16 intrepid explorers will be traveling in the company of a local guide.

Dramatic natural landscapes: You'll take in a vast variety of scenery, from the Mongol Els sand dune to the famous steppe, from the Orkhon River to lush meadowland and dramatic rock formations.

The Naadam Festival:Your adventure ends with the celebratory competitions of the three games of men — archery, horseback riding, and wrestling—that pay tribute to Mongolia's warrior history.

Hiking, horseback riding, and home cooking: You'll have many opportunities to roam beneath Mongolia's big blue skies—on foot, on horseback, and on camels—in addition to trying your hand at a few local dishes.

Overnights in traditional ger camps: A ger is a traditional nomadic dwelling similar to a yurt and has served as home to generations of Mongolians.

Throughout the trip, you'll be spending your nights in a range of remote settings, from the banks of Ögii Lake to multiple national parks.