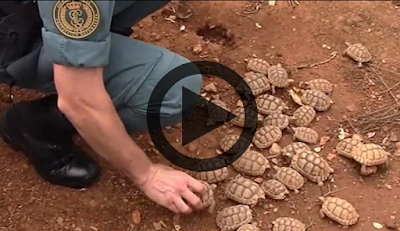 Spanish authorities have dismantled the facility, which contained 1,100 animals and 14 of the 50 most endangered turtle species.

Spanish Civil Guard has just shut down what it calls the largest illegal turtle hatchery in Europe, on the island of Mallorca.

According to police the farm contained 1,110 turtles and tortoises. This haul included 14 of the 50 most endangered turtle species in the world, according to Europol, the European law enforcement agency.

This number is due to grow, as more than 200 of the females are gravid, or due to soon lay eggs, authorities noted.

Besides adults and hatchlings, the raid also turned up 750 eggs.

Video from Spanish authorities shows turtles housed in plastic tubs in crowded conditions on the farm, which was also populated with opaque tubs of water and barren dirt pens.

Code-named Operation Coahuila, the foundations of the investigation and subsequent raid were laid in February 2017, when police report that they discovered a shipment of illegal turtles at the Palma de Mallorca Airport in the Balearic Islands of Spain.

The turtles found in this shipment did not correspond to what was declared on the package, the police say.

Many of the turtles in the February shipment were species at high risk of extinction and protected by the Convention on International Trade in Endangered Species (CITES).

A long investigation ensued leading the Spanish Civil Guard eventually to the hatchery, located on the island of Mallorca.

So far, three suspects have been arrested. Two of the suspects were Germans and the third suspect is the owner of an exotic pet store in Barcelona.

Three others are also under investigation. If the detainees are unable to present documents showing their legal ownership, they will likely be charged for the crimes of smuggling of protected species.

Of the 1,100 turtles, there were 62 species recorded. The farm contained radiated tortoises (Astrochelys radiata), native to Madagascar, which are critically endangered, according to the International Union for Conservation of Nature.

They are also listed on Appendix I of CITES.

Captive-bred radiated tortoises, and other species listed on Appendix I of CITES, are only allowed to be sold internationally for commercial purposes if the breeding facility is approved and registered with CITES.

The farm in Mallorca is not listed on the CITES registry of captive-breeding operations.

There were also species endemic to Mexico, the United States and Canada, the Civil Guard noted.

Turtle and tortoises are trade for their shells, meat, and leather. They are also bred to be sold as pets.

The trade in turtles and tortoises is one of the driving factors in their demise leading them to extinction all over the world, says Max Maurer, director of membership and public outreach at Turtle Conservancy, who adds that he is not passing judgment on the suspects, who deserve the chance to make their case in court.