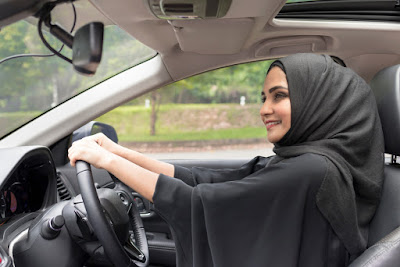 Car dealership showrooms inside the Kingdom of Saudi Arabia shouldn’t be the only sector gearing up to capture the new business opportunity offered by the recent driving ban lifted on Saudi women.

Data released by SEMrush, a leading digital marketing suite, revealed largely positive sentiment towards Saudi women drivers not only inside the Kingdom but also across the GCC, including the UAE.

SEMrush analysed the sentiment of more than 20,000 tweets in KSA and the UAE during the week Saudi women were officially permitted to start driving on the Kingdom’s roads.

The results showed the large majority of Arabic tweets in KSA and UAE had positive sentiment towards the decision to allow Saudi women to drive.

The initial positive sentiment across the GCC will provide additional reason for the region’s rent-a-car sector to expect additional growth in inter-GCC road tourism and short-haul business travel coming from and to Saudi Arabia.

Saudi Arabia is one of the largest contributors to tourist arrival volumes in neighbouring GCC markets, including the UAE.

With 120,000 Saudi women already applying for driving licenses according to the Saudi Ministry of Interior, the upcoming Eid holiday in August could witness an unprecedented boom in Saudi women embarking on road journeys across the Kingdom and UAE during late summer.

The developments in KSA represent a significant opportunity for the regional rent-a-car sector, especially in the UAE which is the lead tourist destination for GCC families, according to Adam Zeidan, Corporate Communications Manager – GCC and Turkey, SEMrush.

It is up to the GCC rent-a-car sector to decide how to capture this new opportunity using innovative services tailored to Saudi women.

Could GCC car rental fleets witness a big increase in vehicles suitable for mothers, such as MPV’s, cross-over SUV’s and station wagon types?

Or will the rent-a-car business expand its service counter networks to better connect KSA with the GCC, easing vehicle pick-up and drop-off points, as large numbers of Saudi women choose to drive from the Kingdom to Bahrain or the UAE for holidays?

It will be interesting seeing how the sector responds.

Prior to the lifting of the ban, industry estimates forecast the UAE car rental sector would witness 25% annual growth up to the year 2020.

The sector is now expected to witness further acceleration in KSA and the UAE, as tens of thousands of Saudi Arabia’s 10 million-strong female nationals start to obtain driving licenses in their home country.

Saudi women have been gearing up for their first week of legally being allowed to drive. While they are celebrating by taking to the streets, car dealerships are smiling on their way to the bank.

A new graph by Statista, based on PwC data, has revealed the projected number of female drivers, as well as the forecasted car sales figures in 2020.

This is significant because Saudi Arabia represents the largest automobile market in the region, and car sales and imports figures from previous years had been stagnating. It makes sense why Crown Prince Mohammed Bin Salman would rewrite the old law at this very moment in time.

Faisal Abushausha, chairman of the national committee for cars at the Council of Saudi Chambers, told the Saudi Gazette he expects a 6% to 10% increase in car sales with women starting to drive in the Kingdom.

He estimated the number of cars to be sold this year to cross 405,000.

According to The Economist Intelligence Unit’s projections, car sales will increase at a compound annual growth rate of 5.6% in 2018‑22—which balances the impact of stronger demand by women with the introduction of value-added tax (VAT) and the gradual decline of petrol subsidies.

With this new decree, it seems everyone is a winner in Saudi.

Starting Monday, June 4, Saudi Arabia began distributing the first batch of driving licences to its female citizens. Ten licences were issued so far, and most of those who were awarded driving permits had already held similar licences abroad.

Many of the Kingdom’s women have been attending driving lessons at female-only college campuses, in anticipation of the historic date.

With such a large portion of the population about to drive for the first time, what are the widespread effects on the country as a whole?

What is about to occur in Saudi Arabia has likely not happened before anywhere else in the world.

When the website for Saudi’s first driving school for women opened for online registration in February, it attracted more than 165,000 applicants in just three days.

According to a survey in 2017 by YouGov, 80% of Saudi women interviewed wanted to get their license and drive.

That’s approximately 9 million women who are about to or interested to begin driving. This huge influx of citizens entering the driving and automobile sector will have a massive impact on several of the country’s sectors and industries.

The greatest winners to come out of this entire situation are automobile companies. The incoming surge of demand for vehicles is about to shoot through the roof.

These companies have already launched several campaigns to capitalize on this change. Ford, Volkswagen and others have been quick to snare potential female buyers with promotions, campaigns and others strategies to hopefully kick-start some long-lasting brand loyalty.

The motor insurance sector in Saudi is another winner. This market is expected to grow by 9% annually between 2017-2020, arriving at a value of $8 billion.

Given that most of these women have never driven before, insurance rates are bound to be inflated as the risk of vehicular accidents will be quite high.

UK-based insurance broker firm ALA found that 21.6% of new drivers have an accident in their first year on the road.

Moreover, they discovered that new drivers are often charged with the highest insurance premiums, in comparison with more experienced drivers.

An influx of new drivers means a greater increase in traffic density. With almost half the population about to be granted access to the Kingdom’s roads, traffic rates are inevitably going to be impacted.

Traffic will also have some impact on businesses and their performance. In the UK for example, the Tomtom Traffic Index found that almost $1.2 billion is wasted by drivers stuck in traffic per year. This also adds up to 16 working days that businesses are practically losing.

To alleviate the incoming surge in traffic, the Saudi government could look into commissioning new roads and routes, which would prove a boon to contractors.

However, Google Maps and other GPS services won’t be enough to help Saudi’s new drivers traverse the roads once construction projects kick in.

Reroutes and detours do not register very accurately on these apps, and this in turn will lead to congestion and chaos as women try to navigate the urban landscape for the first time.

With the infrastructure Intelligence Center tracking 111 infrastructure construction projects in min-2017, the addition of new road projects will only lead to more headaches.

One market that will definitely suffer the fallout from the new decree is the taxi industry. Up until now, Saudi women have relied on male relatives, taxi drivers and chauffeurs to drive them around.

With women finally taking the reins, the taxi industry is about to be hit hard. However, the more forward-thinking taxi services such as Careem have already figured an appropriate strategy to combat this.

By February, they had effectively signed up more than 1,000 female drivers. This will no doubt lead to a better brand image in the region, as Careem dons a more liberal outlook to the public.

The ride-hailing company revealed that up to 70% of the app’s users in the Kingdom are in fact women, so evolving to meet the market’s new needs will be vital to prevent losses.

Permitting female citizens in Saudi to finally be able to drive will help bring the country into the 21st century, yet this massive change will have widespread repercussions that will reverberate throughout the nation.

It is up to the Saudi government to make sure this new law will transition as smoothly as possible.