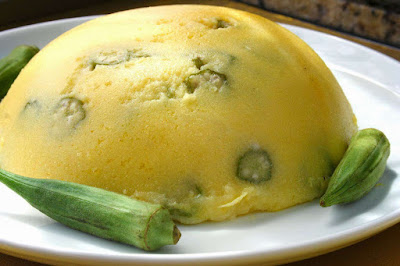 It consists mainly of cornmeal or corn flour and okra (ochroes). Cornmeal, which comes readily packaged and is available at supermarkets island wide, and okra, which can be found at supermarkets, vegetable markets and home gardens, are very inexpensive ingredients.

Because these main components are inexpensive, the dish became common for many residents in Barbados' early colonial history. Cou-cou derives from the island's African ancestry and was a regular meal for those slaves who were brought over from Africa to Barbados.

In Ghana, a similar and probably the original African meal of fermented corn or maize flour eaten with Okra stew and fish is known as Banku, a favourite dish of the Ga Tribe in Accra.

It has historically been proven that most slaves taken to Barbados came from Ghana, as further evidenced by some shared names.

A unique cooking utensil called a cou-cou stick, or fungi stick, is used in its preparation. A cou-cou stick is made of wood, and has a long, flat rectangular shape like a 1-foot-long (30 cm) miniature cricket bat. 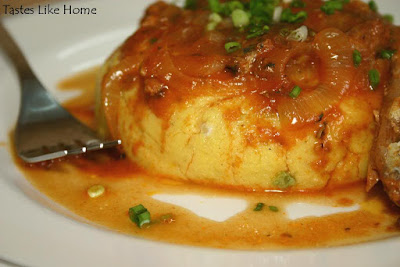 It is believed by Barbadians to be essential in stirring the cou-cou, as the dish takes on a firm texture and the cou-cou stick makes it easier to stir in a large pot.

Corned beef, or just beef stew, is also a common accompaniment to cou-cou.

Traditionally, cou-cou is served on Fridays at homes across Barbados and local food establishments.

Cou-cou can also be prepared using breadfruit instead of cornmeal.

In Trinidad and Tobago cou-cou or coo-coo)is often prepared alongside callaloo and either stewed or fried fish.

In some islands, e.g. Barbados, Antigua, or the Virgin Islands, cou-cou may be cooked without okra, and goes by the name fengi, fungie, or fungi.