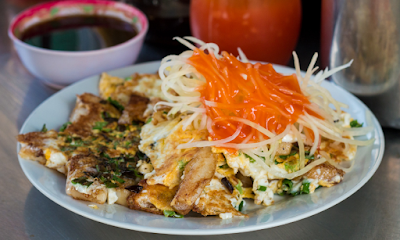 From commoner’s rice to the delights of the city’s famed Chicken Street, there are many street food dishes you simply can’t miss when you visit Hanoi.

Hanoi is a street food wonderland. Follow almost any lane in this vivid, motorbike-clogged city and you will find a cacophony of food stalls with colourful signs shouting the names of mysterious Vietnamese dishes.

Behind them, scores of people slurp, munch, drink and chatter, huddling on the city’s iconic miniature plastic stools.

You can spend two weeks in this burgeoning city and never eat the same meal twice. So when all you have is two days in between, say, visiting the well-trodden northern Vietnam tracks of Halong Bay and Sapa, the choices can be overwhelming.

How can you get the most taste out of your stay?

This soup is Vietnam’s de facto national dish, and Hanoi lays claim to its origin. It consists of a steaming bowl of rice noodles served in a delicate beef- or chicken-based broth that has simmered for hours in the pot, and comes with sprinkles of fresh herbs.

There’s no bad pho in Hanoi, but if you happen to be around Hanoi’s West Lake area, go to Tu Hung Pho Bo at 164 Yen Phu. The restaurant is popular for its pho bo tai chin, which consists of beef brisket, thin slices of steak, and flank meat.

Enjoy it with a plate of banh quay – Chinese-style savoury doughnuts.

Vietnam is crazy about coffee. Finding a good coffee in Hanoi is easy, but for something that is truly different – and decadent – try ca phe trung, or egg coffee. This deliciously eggy concoction is airy and creamy, poured over strong espresso or iced coffee.

The mother of all ca phe trung in Hanoi is Cafe Giang, at 39 Nguyen Huu Huan street. It is tucked down a back alley; follow the alley until you arrive at a charming den that looks like it could be from a Wong Kar-wai film with its muted, time-worn walls, potted plants and low wooden tables.

The cafe is a throwback to Hanoi’s communist era and is usually full of people of all ages.

Com binh dan roughly translates to commoner’s rice. Shops offering it usually have many classic home-cooked Vietnamese dishes on offer and are excellent places to get a taste of local fare.

There are countless com binh dan eateries throughout the city, but one excellent spot to try is Com Binh Dan New Day at 72 Ma May Street. Skip the main entrance and enter through the side alley where you can see all the dishes being made and displayed.

Don’t order from the flashy menu; simply point at what you want and the server will arrange the dishes on your plate. To drink, order the canh chua (sour soup) to go with your rice, and nuoc rau ma (pennywort juice) to drink.

Ly Van Phuc street has for decades been known as Chicken Street by locals and expats alike for its rows of ga nuong (barbecued chicken) vendors.

During the day, the sleepy alley might not look like much, but once the sun sets, the barbecues start to crackle, the plastic stools are set on the pavement, and hundreds of skewers of various chicken parts, together with honey baguettes, begin to sizzle on the grill.

The chicken on Chicken Street is succulent, has crispy skin and comes with mildly hot barbecue sauce. You’ll get to choose between chicken legs, breasts, wings and feet, with pickled morning glory or fresh slices of yam to go with your meal.

But the real star here is the crisp grilled honey baguettes, a leftover of Vietnam’s French colonial heritage.

Of the dozens of vendors on Chicken Street, the two to try are Binh Minh Ga Nuong – said to be the first that opened on the street and Quynh Nga Ga Nuong, which serves the best barbecued wings in the neighbourhood.

Xoi is Vietnam’s take on steamed glutinous rice. The most famous variant typically eaten for breakfast, is xoi thap cam, which is served with generous add-ons including Vietnamese and Chinese sausages, pork skin or pork belly, pate, strips of steamed chicken and egg, shavings of dried mung bean paste, and fried shallots.

It is delicious, but filling, so share a plate if you want to save some precious room in your stomach for the rest of your street food expedition. 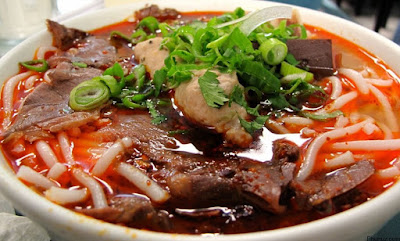 Locals flock to Xoi Co Son Cau Go at 44 Cau Go Son street for its generous thap cam toppings, while others go to Xoi Ba Gia at 146 Quan Thanh street, which has been in operation for more than 40 years.

Perhaps the tastiest dish known to man, bun cha consists of freshly grilled chunks of pork patty and roasted pork belly served in a bowl of broth a mix of fish sauce, vinegar and lime, with slices of pickled kohlrabi, green papaya, and carrots – that is slightly sweet and tangy.

This feel-good soup is typically eaten with Vietnamese bun - a thin vermicelli-like noodle - and a generous serving of greens such as fresh Thai basil, cilantro, fish mint, lettuce, banana flower and coriander.

If that is not enough goodness for you, some bun cha shops also offer a side of spring rolls, fried to crisp perfection.

The most famous place to eat bun cha is Bun Cha Huong Lien, which became known as Bun Cha Obama after the US president ate there with celebrity chef Anthony Bourdain in 2016.

When Bourdain’s death was announced earlier this month, Obama tweeted a photo of the two of them at the humble eatery in tribute to the late chef.

The restaurant brims with tourists and local patrons day in and day out, but its bowl of bun cha is worth the hype. Those who prefer to dodge the crowds can go straight to the locals’ favourite at Bun Cha Binh Chung.

This establishment has been around for more than 30 years and offers thit xien or pork skewers and shrimp cakes to go with its bun cha bowl.

Nem chua ran is a popular snack in Hanoi consisting of deep-fried cured pork sausage that is eaten on a tiny stick with lard-fried fries and hot sauce. It is a tasty companion for your cold glass of bia hoi or draught beer.

Nem chua ran can be found in the Ngo Tam Thuong alley close to Hang Bong street. As soon as the sun sets, this small alley is usually crammed with locals, and the shop at 40 Ngo Tam Thuong is an all-time favourite.

Providing you have saved some room, head to Hang Than street – Hanoi’s dessert lane – where you can indulge your sweet tooth day or night. The must-try here is kem caramen, a Vietnamese twist on the French creme caramel.

Served on a small plastic plate, this bouncy custard pudding is bathed in a layer of tan caramel, and steamed instead of cooked in the bain-marie style like its French counterpart. It is the perfect sweet treat for those humid, Hanoian days.

Kem Caramen Duong Hoa on Hang Than street opened in 1995 and offers a wide selection of desserts such as mango che xoai or mango pudding, home-made yogurt and coconut ice cream.

So happy when I found your blog and I absolutely love your information. Thanks for sharing information. Your web-site is very cool.