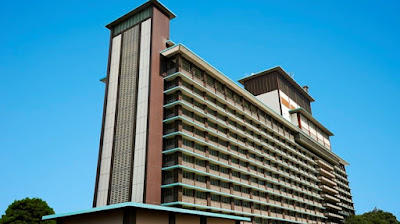 A total of 508 luxury rooms will be available in two buildings on the spacious central-Tokyo Okura property, about half of which will be covered with lush gardens and greenery.

The smaller of the two buildings, The Okura Heritage Wing, which will have its own reception, will be a 75-meter, 17-story structure with refreshing views of gardens and greenery on three sides.

The Wing will be a top-end luxury hotel with a tasteful, classically Japanese atmosphere. The beloved Yamazato Japanese restaurant will make its awaited return, as will the renowned Chosho-an tea ceremony room, making the Wing the perfect choice for special gatherings in elegant Japanese settings.

Guest rooms will begin on the 28th floor, affording wonderful vistas of Tokyo from every room.

The Tower will offer fine dining options and banquet facilities, including one of the largest ballrooms of any hotel in Tokyo to establish The Okura Tokyo immediately as a premier venue for prestigious international conferences.

As Leonardo da Vinci said, simplicity is the ultimate sophistication. This is what we are trying to realize with The Okura Tokyo, a hotel designed on the philosophy of simplicity and elegance, said Toshihiro Ogita, President of Hotel Okura.

It was sad to put our much-adored Hotel Okura Tokyo to rest, but I am fully confident that The Okura Tokyo will be equally loved by our worldwide guests and visitors.

The Okura Tokyo will proudly offer the incomparable Japanese-style hospitality and other attributes that distinguished our original hotel, which we will combine with the highest standards of contemporary luxury to ensure that guests enjoy memorable, supremely comfortable stays.

The Okura Museum of Art will also make its second coming on the property. Originally established in 1917 as Japan’s first privately operated art museum, it will once again attract art lovers from the world over with a celebrated collection that includes some 2,500 works of art.

Among which are three National Treasures, 13 Important Cultural Properties and 44 Important Art Objects designated by the Japanese government.

The traditionally themed museum building will be one of the design elements comprising the property’s impressive new entrance, The Okura Square, which will also feature a large waterscape that reflects the changing seasons and times of day.

The original Hotel Okura Tokyo opened its doors in 1962 as a first-class hotel that was quickly prized worldwide for its traditional Japanese beauty combined with the very best accommodations, cuisine and service.

A number of other decorations will be faithfully reproduced for the new lobby. These will include the Four Petal Flowers wall tapestry, a Nishijin-weave silk brocade originally designed by Japanese human national treasure Kenkichi Tomimoto, and shoji paper windows with the Asanoha-mon leaf-pattern lattice work.

In addition, the lobbies of The Okura Heritage Wing and The Okura Prestige Tower, The Okura Square, The Okura Salon, and selected restaurants and bars have been designed by Yoshio Taniguchi, celebrated architect of the redesigned Museum of Modern Art in New York and son of Yoshiro Taniguchi, designer of the Hotel Okura Tokyo’s famous lobby, a further nod to the Okura legacy.

The original lobby designed by my father was extremely popular, said Yoshio Taniguchi, so I felt a special responsibility to create distinctive Japanese designs that would similarly inspire guests for years to come.

The Okura Tokyo will be the Okura family’s first Two Brand, One Operation hotel, a concept that the company will expand going forward. Further details are provided together with a rendering of The Okura Tokyo in a concept movie unveiled today.

Covering approximately half (13,000 square meters) of The Okura Tokyo’s property, the Okura Garden will be an expansive urban oasis that captures the beauty of each season and incorporates the Japanese-garden karesansui tradition of using rocks and raked sand to express water themes.

The Okura Heritage Wing’s lobby will welcome guests with the quiet warmth of tasteful Japanese designs and a beloved wall mural inherited from the former Hotel Okura Tokyo.

The spacious lobby will be accentuated with additional iconic Okura decorations, including the hanging Nishikibari silk brocade and hexagonal bracket lights.

The Okura Prestige Tower’s lobby will be a reprise of the former Hotel Okura Tokyo lobby, proudly carrying on the Okura’s tradition of beautiful Japanese aesthetics.

Decorations will include signature legacy pieces such as the Okura Lantern ceiling lights, lacquered tables and chairs arranged like plum flowers, and the world map and clock.

The spacious guest rooms in The Okura Heritage Wing will offer a generous floor area of 60m2 with broad 8m widths.

All rooms will feature the distinctive flavor of Japanese interior design and come equipped with mist saunas, spa baths for enhanced relaxation.

The Okura Prestige Tower will offer standard-size guest rooms measuring some 50m2 and afford vistas of the Tokyo metropolis from expansive windows.

Various choices of suite rooms will be available in both buildings. The top two (39th and 40th) guest floors of The Okura Prestige Tower will be an unprecedented duplex suite comprising a 720-square meter room with three bedrooms—Japan’s largest hotel suite.

With its two-story-ceiling living room and event-ready theater, the luxurious suite will also be an exceptional venue for one-of-a-kind meetings.

Additionally, the bathroom of the master bedroom will feature a Ne-Yu, bed bath and Utase-Yu, waterfall bath for supreme relaxation.

Dining choices in The Okura Heritage Wing will include Yamazato, where guests will enjoy Japanese cuisine ranging from breakfast to kaiseki multicourse meals with views across a lovely Japanese garden, the Chosho-an tea ceremony room, and Fine Dining, which will serve culinary creations based on French cuisine accented with Japanese seasonal delicacies.

On the top floor of The Okura Prestige Tower, guests will take in fabulous views of the city while dining at historic Sazanka, the Japanese hotel trade’s original teppanyaki restaurant.

Additionally, an all-day dining restaurant, Orchid, will serve a mix of cuisine with relaxing indoor and outdoor seating, and Toh-Ka-Lin will feature delicious Chinese cuisine.

The Okura Prestige Tower’s fifth-floor Orchid Bar will be a sophisticated, contemporary reinterpretation of the original Orchid Bar’s tradition and prestige.

On the top floor, Starlight guests will enjoy magnificent views of the Tokyo nightscape from three vantage points—The Bar, The Lounge, and The Chef’s Kitchen.

Baron’s Bar on the fifth floor of The Okura Heritage Wing will provide patrons with a secluded hideaway.

The Okura Prestige Tower will boast no fewer than 20 function rooms spanning a wide range of capacities. The Heian Room will accommodate up to 2,500 persons, making this one of Tokyo’s largest ballrooms.

Motifs from the Collection of Ancient and Modern Japanese Poems, a national treasure, will decorate the walls. The room will also boast a first-class audio and visual system.

The Okura Prestige Tower’s wedding facilities will include the top-floor Sky Chapel for stunning views of Tokyo, the classically elegant Grand Chapel, and a hall for traditional Japanese Shinto weddings.

The Okura Prestige Tower will offer access to The Okura Fitness & Spa for exercise and relaxation against the backdrop of panoramic views of Tokyo on the 26th and 27th floors.

Noted architect Yoshio Taniguchi has designed the lobbies of both buildings as well as The Okura Square.

Born in Tokyo in 1937. After finishing his studies at Harvard University’s Graduate School of Design, Mr. Taniguchi gained valuable experience in the office of architect Kenzo Tange.

Hotel Okura Co., Ltd. is expanding its global portfolio with a special focus on Asia. Hotel Okura plans to open the following 11 hotels among three hotel groups in the coming future:

Opening in 2021 – The Okura Prestige Taichung