PHILIPPINES: Board A Jeepney At Your Own Peril, Its Not A Safe Haven 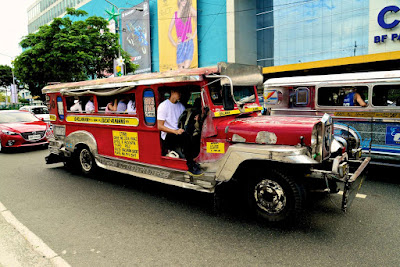 I think the most valuable lessons I've ever had about dealing with people - how to be considerate, mindful of others and staying out of trouble - I learnt from riding jeepneys.

The jeepney the most popular means of public transport in the Philippines is a vehicle made to look like a gaudy, stretched version of the military jeeps the Americans used in World War II.

Passengers sit on two cushioned benches on both sides of what basically is a truck bed, usually 10 on each side. Some really long jeepneys have as many as 20 passengers on each side.

There is a lot of physical contact on board a jeepney. Personal space is always under siege. You sit shoulder to shoulder with a stranger on each side. You also have someone sitting across, just an arm's length away, often with your knees touching theirs.

I sat beside a man who had too much to drink. Passengers like him are usually harmless. All they do is doze off. But they also tend to rest their tired heads on your shoulder, creating some pretty awkward moments.

The way to deal with the sleepy head is not to slap him in the cheek and force him to wake up.

In this case, a slight jerk of the shoulder just as the jeepney rolls over a pothole will be enough to jolt him back into attention.

That is, till his head resumes its slow, inevitable descent onto your shoulder.

Often, a jeepney ride is an exercise in manners and social grace.

You see, the way you pay is that you physically hand over bills or coins to the driver.

This, I think, has made the Filipino commuter one of the most helpful and considerate in the world, always quick to yield a seat or let an old woman cut the queue.

Riding a jeepney is not for the shy and timid. At least twice, you'll have to call attention to yourself.

First, when paying, you'll have to shout "Bayad po! meaning - My payment, sir - in a voice loud enough to be heard over the noise of a rickety, diesel-engined jeepney, and a raucous street filled with cars and pedestrians. 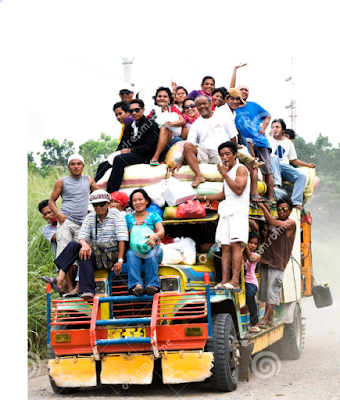 Then, when getting off, you'll have to shout Para meaning Stop, in an equally forceful, clear tone.

If you happen to be sitting deep inside the jeepney, you'll have to navigate your way through about a dozen pair of knees and be careful that whatever you're carrying will not hit somebody's head.

It will be a mistake to think of the jeepney as a safe haven. Sure, you're inside a vehicle, surrounded by a group of people.

But with its windows lacking in shutters, glass or anything that will separate you from the outside world, and an open rear, the jeepney is a favourite target for petty thieves.

I have seen a couple of times a woman suddenly scream inside a jeepney, as her necklace is being snatched from behind her.

Sometimes, a nefarious character would step inside a jeepney, grab someone's handphone, and walk away nonchalantly like he just plucked off an apple from a tree.

Other times, it's just plain highway robbery. Two or three men would step into a jeep, stick out a knife or gun, and then clean the passengers of their valuables.

I have had one of these experiences. It was late at night, and I was sitting beside the driver. It had been a long day, so I had been slipping in and out of sleep.

Midway into my journey, I sensed my wallet being pulled out of my pocket. Someone was pulling a fast one on me, but I just pretended I was still asleep.

There was no point being the indignant, crusading victim. I didn't have that much money in my wallet anyway, and I didn't know how many of them were behind me, and they were most likely armed with a knife or something.

So I feigned sleep and let them have my wallet. As I was about to get off, I told the driver I couldn't pay him because someone had stolen my wallet.

Thankfully, he let me off without a fuss.

Anyway, it wasn't so bad. All I lost was a near-empty wallet and a small amount of pride.

I did get something out of it though: I probably walked away with my life, and a story I can tell over and over again.

Email ThisBlogThis!Share to TwitterShare to FacebookShare to Pinterest
Labels: “Aleppo: Will of Life”, Jeepney