ETHIOPIA: Ethiopian Airlines Heads To Eritrea After Opening The Door Of Peace 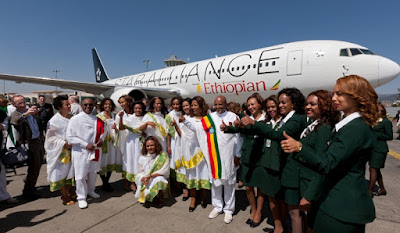 Long-time foes Eritrea and Ethiopia opened the door of peace on Tuesday after the first high-level visit from Asmara to Addis Ababa in nearly two decades, raising hopes for an end to one of Africa’s most intractable military stand-offs.

In a highly symbolic move, Ethiopian Prime Minister Abiy Ahmed said Ethiopian Airlines would restart flights to Eritrea for the first time since 1998 when conflict erupted between the two nations over their disputed border, with diplomatic relations broken off ever since.

Tuesday’s visit comes after Abiy said this month he would honour all the terms of a peace deal, suggesting he might be ready to settle the border dispute, a move welcomed by Eritrea.

Today is a day of joy because two identical peoples and two generations have been separated throughout that period. But through struggles, we have opened the door of peace, said Eritrean Foreign Minister Osman Saleh.

Abiy said he hoped the dispute would end with this generation and reiterated his willingness to accept the transfer of territory.

There will be lands swapped between the two countries but that will not matter, there will not be a border between us as our relationship will strengthen, he said at a state dinner with the Eritrean representatives.

For Ethiopians who have longed for heading to Massawa in Eritrea for a stroll, I call on you to be ready as Ethiopian Airlines will start services there soon, he said, without giving further details.

He also told artists to get ready to celebrate the Ethiopian New Year in Eritrea’s Asmara.

The Ethiopian calendar, sets September 11 as the 1st day of the New Year, and large celebratuions are usually held around the country to mark this day, which also signifies the approximate end of the rainy season.

Earlier Olympic athletes, singers, actors and religious leaders joined Abiy at Addis Abiba airport to welcome Saleh and other top officials, who were presented with garlands of flowers.

The flags of both countries fluttered from lampposts in Addis Ababa along with a banner reading Welcome!

Eritrean President Isaias Afwerki had welcomed Ethiopia’s positive messages and decided to send the delegation that included his adviser Yemane Gebreab and his envoy to the African Union.

The relationship between Ethiopia and Eritrea is about more than the border. When we make peace, it will benefit all of east Africa, Ethiopia’s foreign affairs spokesman Meles Alem said at the airport.

The border war killed some 80,000 people and the sides remain at odds over the status of the frontier town of Badme. The border remains militarised.

Abiy was at a rally hit by a grenade that killed two people on Saturday an attack that government affiliated media blamed on opponents of reforms announced since he took office in April, including airline and telecoms privatisations and the rapprochement with Eritrea.

Eritrea and Ethiopia broke off diplomatic relations two decades ago, although Asmara has a permanent delegation in Addis Ababa representing it at the African Union, whose headquarters are in the Ethiopian capital.

No Eritrean representatives have been part of an official visit for talks with the Ethiopian government since at least 1998.