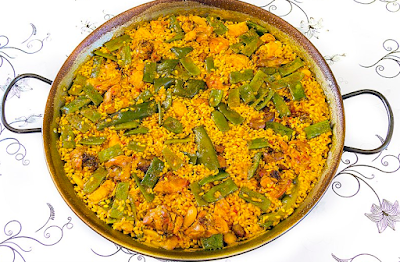 Paella is a Valencian rice dish that has ancient roots but its modern form originated in the mid-19th century in the area around Albufera lagoon on the east coast of Spain adjacent to the city of Valencia.

Many non-Spaniards view paella as Spain's national dish, but most Spaniards consider it to be a regional Valencian dish. Valencians, in turn, regard paella as one of their identifying symbols.

Valencian paella is believed to be the original recipe and consists of white rice, green beans or bajoqueta and tavella, meat such as chicken, duck and rabbit, white beans or garrofon, snails, and seasoning such as saffron and rosemary.

Another very common but seasonal ingredient is artichokes. Seafood paella replaces meat with seafood and omits beans and green vegetables. Mixed paella is a free-style combination of meat from land animals, seafood, vegetables, and sometimes beans.

Most paella chefs use bomba] rice due to it being less likely to overcook, but Valencians tend to use a slightly stickier and thus more susceptible to overcooking variety known as Senia. All types of paellas use olive oil.

Paella is a Valencian word which derives from the Old French word paelle for pan, which in turn comes from the Latin word patella for pan.

The word paella is also related to paila used in many Latin American countries. Paila in the Spanish language of Latin America refers to a variety of cookware resembling metal and clay pans, which are also used for both cooking and serving.

The Latin root patella from which paella derives is also akin to the modern French poêle, the Italian padella and the Old Spanish padilla.

Valencians use the word paella for all pans in the Valencian language, including the specialized shallow pan used for cooking paellas.

However, in most other parts of Spain and throughout Hispanic America where the Spanish language is spoken as opposed to the Valencian language, the term paellera or paella pan is more commonly used for the specialised pan while paella is reserved for the rice dish prepared in it.

Although both terms are deemed correct for the pan, as stated by the Royal Spanish Academy, the body responsible for regulating the Spanish language in Spain.

Paelleras are traditionally round, shallow, and made of polished steel with two handles.

Some claim that the origin of the word paella comes from the Arabic, pronounced baqiyyah, meaning leftovers. This claim is based on the 8th century custom where Moorish kings' servants would take home the rice, chicken, and vegetables their employers left at the end of the meal.

On the Mediterranean coast, Valencians used seafood instead of meat and beans to make paella. Valencians regard this recipe as authentic, as well. In this recipe, the seafood is served in the shell. A variant on this is paella del senyoret which uses seafood without shells.

Later, however, Spaniards living outside of Valencia combined seafood with meat from land animals and mixed paella was born. This paella is sometimes called preparacion barroca or baroque preparation due to the variety of ingredients and its final presentation.

During the 20th century, paella's popularity spread past Spain's borders. As other cultures set out to make paella, the dish invariably acquired regional influences.

Consequently, paella recipes went from being relatively simple to including a wide variety of seafood, meat, sausage including chorizo, vegetables and many different seasonings. However, the most globally popular recipe is seafood paella.

Throughout non-Valencian Spain, mixed paella is less rare. Some restaurants both in Spain and abroad that serve this mixed version refer to it as Valencian paella.

However, Valencians insist that only the original two Valencian recipes are authentic, and generally view all others as inferior, not genuine, or even grotesque.

According to tradition in Valencia, paella is cooked over an open fire, fueled by orange and pine branches along with pine cones. This produces an aromatic smoke which infuses the paella. Also, dinner guests traditionally eat directly out of the paellera.

Some recipes call for paella to be covered and left to settle for five to ten minutes after cooking. 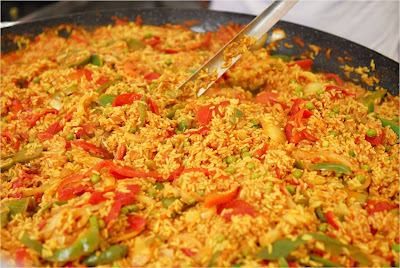 This recipe is standardized because Valencians consider it traditional and very much part of their culture. Rice in Valencian paella is never braised in oil, as pilaf, though the paella made further southwest of Valencia often is.

- Saute meat after seasoning with salt.

- Boil to make broth and allow it to reduce by half.

- Remove the rosemary once flavour has infused or it starts to fall apart.

- Add rice and simmer until rice is cooked.

Recipes for this dish vary somewhat, even in Valencia. The recipe below is based on the two cited here.

- Heat oil in a paellera.

- Add mussels. Cook until they open and then remove.

- Saute Norway lobster and whole, deep-water rose shrimp. Then remove both the lobster and shrimp.

- Add rice and braise in sofrito.

- Add seafood broth and then saffron or food coloring.

- Add the deep-water rose shrimp, mussels and Norway lobster that were set aside.

- Simmer until rice is cooked.

There are countless mixed paella recipes. The following method is common to most of these. Seasoning depends greatly on individual preferences and regional influences. However, salt, saffron and garlic are almost always included.

- Heat oil in a paellera.

- Sear crustaceans and set aside.

- Add dry seasonings except for salt.

- Braise rice until covered with sofrito.

- Simmer until rice is almost cooked.

- Continue simmering until rice and crustaceans are finished cooking.

After cooking paella, there is usually a layer of toasted rice at the bottom of the pan, called socarrat in Spain. This is considered a delicacy among Spaniards and is essential to a good paella.

The toasted rice develops on its own if the paella is cooked over a burner or open fire. If cooked in an oven, however, it will not. To correct this, place the paellera over a high flame while listening to the rice toast at the bottom of the pan.

Once the aroma of toasted rice wafts upwards, it is removed from the heat. The paella must then sit for about five minutes, most recipes recommend the paella be covered with a tea-towel at this point to absorb the remaining broth.

It has become a custom at mass gatherings in the Valencian Community such as festivals, political campaigns, protests, etc. to prepare enormous paellas, sometimes to win a place in the Guinness World Records book. Chefs use gargantuan paelleras for these events.

Valencian restaurateur Juan Galbis claims to have made the world's largest paella with help from a team of workers on 2 October 2001. This paella fed about 110,000 people according to Galbis' former website.

Galbis says this paella was even larger than his earlier world-record paella made on 8 March 1992 which fed about 100,000 people. Galbis's record-breaking 1992 paella is listed in Guinness World Records.

Many chefs around the world have taken the traditional dish and added ingredients, such as chorizo, that are considered not to belong in the dish by Valencians. Spaniards, especially people from Valencia, have complained about this many times and it is a recurrent topic online.

The alternative name proposed for these dishes, although pejorative, is Arroz con cosas or rice with things. Famous cases are Jamie Oliver's paella recipe which included chorizo and Gordon Ramsay's.

Traditional Valencian cuisine offers recipes similar to paella valenciana and paella de marisco such as arros negre, arros al forn, arros a banda and arros amb fesols i naps. Fideua is a noodle dish variation of the paella cooked in a similar fashion, though it may be served with allioli sauce.

- Locrio — This Dominican dish is thought to be a descendant of paella.