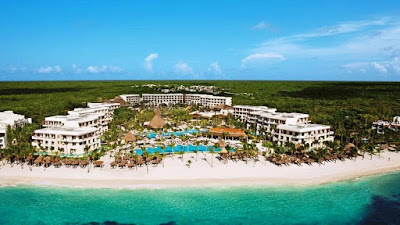 The state of Quintana Roo has surpassed 100,000 hotel rooms, making it the state with the largest tourist infrastructure with Cancun and Riviera Maya leading the way.

Darío Flota Ocampo, director of the Tourism Promotion Council of Quintana Roo, says the state officially has 101,000 hotel rooms, and that by next year, another 3,000 will be added.

The Tourism Promotion Council says they have recorded an occupancy decrease of 0.7 percent compared to the same period last year, however, he says the decrease is due to the increase in hotel rooms adding that they have to increase marketing efforts to fill the additional rooms.

Since September 2017, 749 new rooms were generated by the construction of Riu Costa Mujeres hotel with another 1,600 rooms from the Atelier Playa Mujeres complex.

By the end of 2018, another 1,000 rooms will be opened, including the Marriott Renaissance in Puerto Cancun and the expansion of the Iberostar Cancun hotel.

A the end of 2017, Xcaret Mexico Hotel opened in Riviera Maya with 900 rooms. In mid-2018, 744 more rooms will become available in hotels The Reef, Saint Regis, Kanai and Nickelodeon.

According to the firm Marketing Consultants, it is expected that during 2018, Cancun will have a tourism increase of 3 percent.

Although other sectors of the Mexican economy may suffer in the event of an eventual failure in the renegotiation of the North American Free Trade Agreement, no expert warns of any impact on tourism activity, says the company.

The Secretaría de Turismo de Quintana Roo announced from the beginning of 2018 and over the next 10 years, more than 30,000 hotel rooms will be built in the northern areas of Quintana Roo adding that at least 3,000 are already authorized and under construction in Cancun.

The agency adds that over the last six years, the National Bank of Foreign Trade has granted more than 36 billion peso of investment support for the construction of more than 13,000 rooms in Mexico of which over 6,000 are located in the state of Quintana Roo.