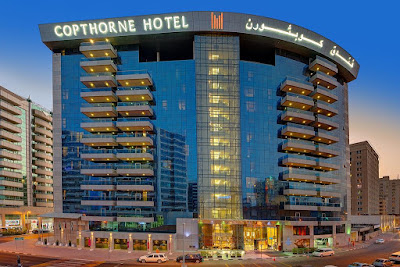 It’s a magic carpet theme, the deputy chief executive says in defence of its unusual yellow roof. We like the design. It has to be suited to this environment.

Centara’s UAE debut is a 600-room resort with waterpark - part of ambitious plans to double the Thai group’s 38-hotel portfolio.

Most notably, perhaps, it targets the burgeoning midscale sector; one reason Mr Blaiklock is confident about the hotel's 2020 entry in an increasingly crowded marketplace.

Citing Department of Tourism and Commerce Marketing figures, global real estate firm Colliers International Mena, says as of January 2018 there were 82,983 hotel rooms and 24,734 serviced apartments in Dubai, and more just opened or under construction.

What prompts Centara to be so confident amid an already competitive hotel ecosystem?

Because it’s a new destination, says Mr Blaikland. With all the facilities that are going to be there it will be a point of difference and commercially it should be very successful. This is a four star product. If it were a five star that’s a busier space right now.

Jumeirah entered the midscale in March with its three-star Zabeel House MINI, in Al Seef, with another due in The Greens. Barsha Heights got Tryp by Wyndham while Al Wasl’s Park Place, Hilton Garden Inn and Hampton by Hilton will follow.

All parties, including government, operators and developers, have realised the opportunity in the market for midmarket hotels, says Mr Sona.

As the Dubai market matures and targets a wide variety of tourists from all continents, it is important to offer a variety of accommodation types for different target segments and price ranges.

As seen in mature markets, the bulk of demand is for midmarket hotels.

The benefit for Dubai is that midmarket hotels are mainly new or yet to be developed, meaning they have the ability to be designed to cater to younger and more modern travellers.

These are not necessarily being built to be prepared for economic headwinds, but to take advantage of increasing demand for well-priced accommodation without compromising on quality and design.

The market is now prepared to welcome a creative offering like ours. Dubai Government has a vision that supports hotel demand is focused to ensure the market remains competitive by developing key leisure destinations and significant infrastructure projects.

The government is also applying regulatory policy that is aligned with the hospitality industry to ensure healthy demand growth and increased inbound tourism.

Despite significant addition to hotel room supply, we view Dubai as one of the most exciting and healthy lodging markets in the world.

The large-box, cookie-cutter hotels have marked their territory; it is time for niche products to enter the market.

We live in a world of austerity where restraint is fun. People are always looking for the good deal, irrespective of their financial standing.

Hoteliers must focus on making properties accessible by driving value evolve with the tastes and habits of today’s novel consumers. You need to ensure your services and products are relevant.

John Podaras, partner at Hotel Development Resources, says Dubai is no stranger to midscale/economy hotels. Many are well established in Deira, Bur Dubai and Barsha. He believes there’s room for more.

There are some excellent hotel companies which have honed their product in challenging markets in Europe, India, Thailand, Indonesia etc, he says.

They have been successful in establishing strong brands, with a fresh look but super-efficient operations, which would do well in the region; France’s B&B Hotels, Germany’s Motel One, Indonesia’s Archipelago Group, as well as innovative concepts out of India.

While there is some understandable reluctance on the part of investors to take a risk on an unknown brand, many will remember the same conversation about Accor’s Ibis and Novotel when introducing those into the regional market in 2004.

He cites the UAE's push to meet anticipated demand ahead of Expo 2020 as catalyst for more midscale ventures, and suggests Louvre Hospitality’s Premier Classe and Campanille, Wyndham’s Days Inn and Howard Johnson could be checking in.

There is probably room for a considerable number of other projects, as the call to meet anticipated levels of visitors going forward will require the targeting of volume markets, which tend to favour economy offerings, says Mr Podaras.

This has been happening in Dubai’s market for the past couple of years as hoteliers are successfully able to fill the burgeoning inventory of available rooms by targeting and identifying wholesalers in new source markets. Ideally, this business should be focusing on commensurately positioned products.

That’s not to say the luxury sector will cease growing any time soon, although some may have to adapt, says Mr Sona.

With a large five-star hotel pipeline, this segment will face some restructuring, he continues.

An increase in competition will show the true differentiation between hotels, where high quality will stand out from the rest, as there will always be demand for proper five-star hotels and resorts in Dubai, as a major global holiday destination.

Some older or lower quality five-star hotels may need to partially compete with lower-rated hotels, to attract mass-market tourists at affordable rates.

So how does Dubai compare with other major cities on hotel numbers?

It is important to note the difference between Dubai and other key global cities such as London, Singapore, Shanghai and New York,says Mr Sona.

The latter are generally very urban, while Dubai also benefits from being a popular beach destination increases Dubai’s demand for five-star resorts, compared to other global cities, which tend be more driven by city tourism and corporate travel.

Approximately one third of five-star hotels in Dubai are beach resorts, in addition to city hotels, mall hotels, marina hotels.

Back on Deira Island, Mr Blaiklock is quite bullish about Dubai’s hotel landscape and Centara’s prospects - particularly coinciding with Expo 2020; he experienced 100 per cent occupancy at a hotel in Vancouver when the Canadian city hosted Expo ‘86.

We’re a different profile of hotel group. A new destination is being created, very close to the airport, he says.

The beauty of Expo is it lasts for six months. Typically, in that period, you can do two years worth of business you would normally have done. The timing is critical.