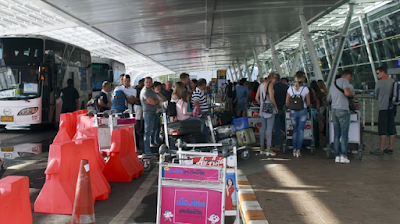 Phuket International Airport
Thailand’s Maya Bay, the beach made famous by Leonardo DiCaprio, officially closed to tourists for four months on June 1, becoming the latest addition to a growing list of destinations that have become victims of their own appeal.

Others include Boracay, in the Philippines, which is almost six weeks into its six-month hiatus, and Koh Tachai, another Thai island, which stopped receiving visitors in May 2016, although it has since reopened.

How, then, do officials in Thailand hope to combat the problem of overtourism led by a sharp increase in the number of Chinese travellers? By investing in infrastructure to facilitate yet more arrivals, of course.

With a combined budget of 120 billion baht (US$3.7 billion), construction on both is expected to begin next year, with completion slated for no later than 2025.

Any one of the 3.5 million passengers who passed through immigration at Phuket International Airport in the first four months of this year might welcome the news.

That figure represented a not insignificant 19 per cent rise on the same period in 2017, according to a report by hospitality consulting firm C9 Hotelworks.

But Phi Phi Leh, home to Maya Bay, Koh Racha Yai and Koh Khai Nok – all favourite destinations for Chinese tour groups and individuals from Phuket – may be less accommodating to an additional 10 million visitors a year.

The economic rewards for such investments are obvious the tourism industry accounted for 9.2 per cent of Thailand’s GDP in 2016, a contribution that is expected to grow to 14.3 per cent by 2027, as detailed in a report by the World Travel & Tourism Council.

However, even high-ranking officials have expressed concerns over the country’s aggressive approach to tourism.

Science and technology minister Suvit Maesincee said: Our strategy was more for less, not less for more, so we invited a lot of tourists from China. I think in the near future we need to change from volume to value.

We are trying to push for CBT or community-based tourism to disperse tourists away from popular sites beyond Bangkok, Chiang Mai or the beaches to promote the unseen Thailand, said Jiraporn Prommaha from the Ministry of Tourism and Sports, speaking to travel industry publication TTG Asia.

Building additional airports at two of the country’s most popular entry points might not seem an obvious strategy for the dispersal of tourists, but who are we to judge!