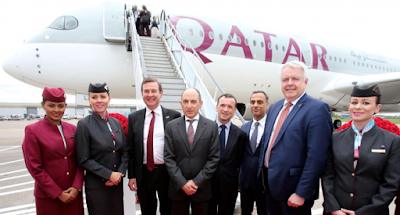 The first Qatar Airways flight between Doha and Cardiff, Wales has been officially inaugurated after the aircraft touched down. The aircraft was welcomed by a celebratory water cannon salute followed by greetings from the Mayor of the Vale of Glamorgan, Janice Charles.

This route is important to the Cardiff economy as it will connect the airport to more than 150 destinations across the world.

Qatar Airways Group Chief Executive, Akbar Al Baker, was joined by the Secretary of State for Wales, Alun Cairns, The First Minister of Wales, Carwyn Jones, the UK Ambassador to the State of Qatar, Ajay Sharma as well as the Chairman of Cardiff Airport, Roger Lewis on the inaugural flight.

To celebrate this new route link, Qatar flew a one-off A350-900 service under the QR323 flight number to celebrate the first time that a commercial A350-900, whose wings are built by Airbus in Wales, had landed on Welsh soil.

However, on the normal QR323 service, it will be operated by a Boeing 787-8 Dreamliner, which will have a two-class configuration featuring 22 seats in Business Class with a 1-2-1 configuration followed by 232 seats in Economy.

However, on the normal QR323 service, it will be operated by a Boeing 787-8 Dreamliner, which will have a two-class configuration featuring 22 seats in Business Class with a 1-2-1 configuration followed by 232 seats in Economy.

Today marks an especially important milestone for both Qatar Airways and Cardiff Airport. The new service, our fifth gateway into the U.K., now provides the people of Wales and the South West with an extensive network of more than 150 destinations globally.

We are delighted to welcome Cardiff into our route network and to be able to provide the Welsh people with a new gateway to the world. We look forward to welcoming our new Welsh passengers on board and to connecting them to Doha and many points beyond.

The first direct flight from Cardiff to Qatar plugs Wales straight into an area of massive investment and an airport with 150 onward destinations around the world. This is the fast track for Welsh companies doing business in the Gulf.

Today’s announcement is the culmination of months of Government activity in public and behind the scenes. The ambition for a daily flight was on the agenda when I met Qatar Airways Chief Executive H.E. Akbar Al Baker more than a year ago at a UK investment summit.

The UK Government has continued to press that case supported by the Office of the Secretary of State for Wales, the Foreign Office and Ministry of Defence.

The UK Government Qatari trade mission last September was all about growing links and unlocking the region for Welsh exports. Qatar is the UK’s third largest export market in the Middle East and accounts for £35 billion of existing investment.

Passengers disembarking from the first direct flight from Doha to Cardiff will get the unmistakable message that Wales is open for business.

I am delighted to welcome the first Qatar Airways flight from Doha to our capital city, Cardiff. The new direct service between Cardiff and Doha is a huge boost for Wales.

It will open up Wales’ links with the rest of the world and deliver new economic, leisure and travel opportunities for Welsh businesses and the people of Wales.

This is a pivotal moment for Cardiff Airport, for Wales and the South West of England. The far-reaching consequences of this service for passengers and businesses will be transformational. I sincerely thank H.E. Mr Akbar Al Baker, for the trust he and Qatar Airways are placing in us.

I am confident that the team at Cardiff Airport will deliver a world-class service with Qatar Airways for all of our passengers both visiting Wales and those traveling across the world.

The critically important relationship between Qatar, Wales and the United Kingdom is substantially strengthened today.

The launch of the new route to Cardiff is Qatar Airways’ first-ever service to Wales, providing passengers enhanced connectivity to the Middle East, Asia, and Australia, with seamless connections to Sydney, Hong Kong, China, Melbourne and many more attractive business and leisure destinations.

Services to London Gatwick, another key entry point for Qatar Airways is due to begin from May 22nd, which will host two route additions in the UK in a single month, highlighting the rapid expansive growth in the airline’s UK network.

These new additions are a part of rapid expansion plans put forward by Akbar. Qatar Airways this year, for example, will be the first Gulf carrier to begin direct services to Luxembourg, which will be yet another niche route that they operate.

The carrier is also going to be operating out of Estonia, Malta, Malaysia, Vietnam, Turkey, Greece and other areas of Spain over the course of 2018.

The aircraft in question, A7-ALU, is one of Qatar’s newest A350’s, aged at just over a month old and has been in the airline’s hand for a space of a week when it was delivered towards the end of April.

By showcasing this aircraft in Wales, it shows that with the new aircraft being so new, it highlights the elements of being proud of having the A350 in their fleet, especially in Akbar’s perspective.

By then using the 787 could have been seen as quite a tactical ploy to keep both parties happy. However, if the Cardiff service was to become more popular, it would not be a surprise if we saw the A350-900 once more over there.

With the likes of Qatar Airways and Emirates launching routes into the more niche areas, it begs the question of whether this is a new strategy taken out by the Middle Eastern carriers.

Emirates is launching a new service to London Stansted, bearing in mind they already have significant operations out of Birmingham, Manchester, London Gatwick and Heathrow already.

This could potentially be because of the fact that most of the Middle Eastern carrier has most corners of the world already covered and that adding frequencies will not provide them with the growth that they actually want.

By operating to the less dense and busy airports, it gives these airlines the chance to have a further growth spurt and cover every area as best as possible.

Collectively, this isn’t just a strategy taken out by Qatar or Emirates.

I believe that going into the future, we are going to see the rise of the smaller airports, such as Cardiff, Liverpool and Newcastle to name a few and I think that these airports are going to be the solution to the overcapacity that those in the UK are currently experiencing.

With the Heathrow expansion not set to be completed for at least another five to ten years, it does beg the question into whether these carriers will need the extra capacity out of the main airports in the years to come.