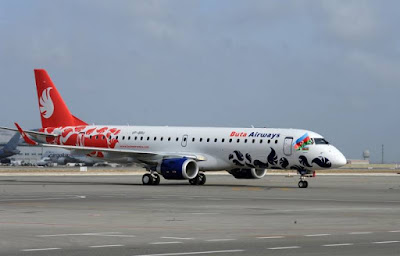 Buta Airways, a newly founded low-fares subsidiary of Azerbaijan’s national aviation holding AZAL, has announced seven new destinations to be added to its route network. Three of these are in Russia.

Buta has launched flights from its base at Heydar Aliyev Airport in Baku to Moscow’s Vnukovo. AZAL currently operates this route as Azaljet. The other two planned destinations in Russia are Kazan and Mineralnye Vody.

Buta will also fly to Antalya (Turkey), Kyiv (Ukraine), Tbilisi (Georgia), and Tehran (Iran). With the beginning of the winter schedule on October 29 the carrier will add flights to St. Petersburg and Istanbul.

Azerbaijan’s first LCC is gearing up to operate its first commercial flight, to Tbilisi, on September 1. Sales will be launched shortly, the airline says, adding that one-way air fares will start at 29 euros.

The airline will offer a standard set of extra paid options, such as hold and carry-on baggage, hot meals on board, and the choice of seat. Water and sandwiches will be offered free of charge.

Buta Airways was founded in December 2016. It currently has one Embraer Е170LR and four Embraer Е190s. The airline’s brand livery was presented in June 2017