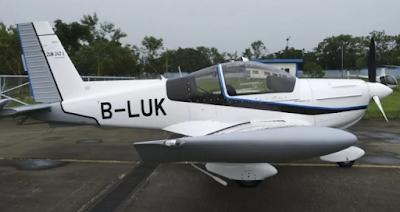 the incident a serious one, the city’s Civil Aviation Department (CAD) said it would take about a year to establish the cause.

The Zlin Z42 aircraft, which belonged to the Hong Kong Aviation Club, crashed into a slope in Ma Shi Chau in Tai Po at about 4.30pm.

The pilot was practising aerobatics at the time.

Police said the victim, who has three months of flying experience, was conscious when rescuers arrived and was taken to Prince of Wales Hospital in Sha Tin.

By 10am on Monday his condition had been downgraded from critical to serious, according to a government spokeswoman.

The pilot was the only person in the aircraft, and no other injuries or property damage was reported, the CAD said.

The crash is very serious, said Raymond Hung Chung-man, the department’s senior airworthiness officer. Our preliminary understanding so far is that the aircraft seemed to have lost control.

A CAD spokesman said the plane was found in bushes at Ma Shi Chau. Its wings and fuselage were damaged.

A witness said he heard a bang when the crash took place but did not see any fire or smoke coming from the scene.

The plane seemed to have failed to climb, lost control and plunged down, he said.

In February 2016, a long-serving CAD officer died after his training aircraft, also a Zlin Z42 from the Aviation Club, plunged into the sea near Plover Cove in Tai Po.