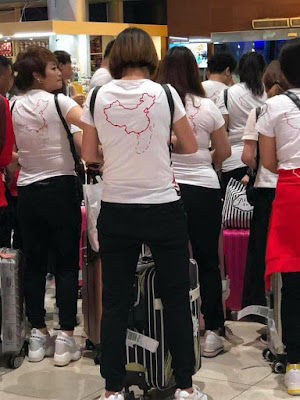 The visitors arrived in southern Cam Ranh airport on Sunday night and were stopped by security at the immigration desk who asked them to take the T-shirts off before allowing them to leave.

A photo of Chinese tourists wearing T-shirts depicting Beijing’s claims to the disputed South China Sea has sparked online anger in Vietnam, prompting calls for the visitors to be deported.

The shirts featured a map of China and its so-called nine-dash line – the sea boundary found on some 1940s-era maps which Beijing says proves its claim to most of the waterway, despite partial claims from Vietnam and other nations.

The territorial dispute is a hot-button issue in Vietnam, which has a turbulent history of conflict with its powerhouse neighbour.

The visitors arrived in southern Cam Ranh airport on Sunday night and were stopped by security at the immigration desk, an airport police officer confirmed.

We asked them to take the T-shirts off before allowing them to leave the airport, said the officer, without providing his name because of the sensitivity of the issue.

Photos of the tourists in their nationalist attire made the rounds on social media – with the nine-dash line crossed out with an “X”.

Some netizens said the tourists were not welcome in Vietnam.

Another, Quan Hai, wrote: We must be determined, not allowing anyone passing through our border gates if the passports, T-shirts or anything else with the dash-line maps.

Vietnam and China have long sparred over the resource-rich sea, where Beijing has built artificial islands and installed airstrips and military equipment.

This is not the first time the dispute has trickled into the tourism sector.

A Chinese passport featuring a map of Beijing’s sea claims was defaced in 2016 by a border agent in Ho Chi Minh City’s airport with an unfriendly welcome note.

More than four million Chinese visitors went to Vietnam last year over 30 per cent of all foreign guests and Chinese tourists are a major cash cow.

Some guides say this can put them in a spot, especially when visitors dispute Hanoi’s version of historical events.

We don’t like the Chinese tourists but they bring us profits, so we cannot resist them, Hung, a Hanoi-based tour operator, said, using only his first name.

A group of guides petitioned authorities in Da Nang last year, complaining that unlicensed Chinese guides were leading tours with their own interpretation of history – and sea claims.

Hung said guides have to push back.

We are Vietnamese, we can’t let them distort the truth about our homeland and our history.