HONG KONG: Chinese Tourists Made More Than 130 Million Outbound Trips In 2017 And Spent US$115 Billion 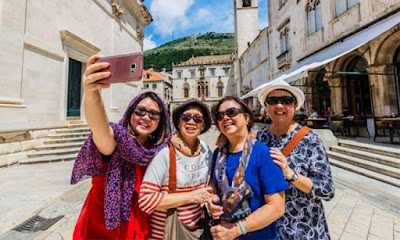 From T-shirts declaring disputed territories to brawls in luxury boutiques, the antics of Chinese tourists overseas have generated many a headline recently.

However, those who have made viral news are but a small percentage of the millions who now travel overseas, 130 million did so in 2017, a number that is expected to rise this year, according to a report by a think tank, the Chinese Academy of Social Sciences.

Eager to cash in on the significant spending power of the newly intrepid population, according to the United Nations World Tourism Organisation, China accounts for more than a fifth of the money spent by outbound tourists.

Destinations around the world are clamouring to attract travellers from the Middle Kingdom. But do places actually experience a net benefit from the boom?

Here in Hong Kong, one of the most popular destinations for mainland Chinese tourists, the advantages are often overshadowed.

Tourism is one of the major pillars of the SAR’s economy, with the total expenditure associated with inbound tourists amounting to HK$296.7 billion last year, according to the Hong Kong Tourism Board.

Nevertheless, a 2017 study published in the Kasetsart Journal of Social Sciences, which explored local residents’ perceptions towards visitors from across the border, found that although economic and educational gains are recognised, they are far outweighed by social and cultural concerns.

Those surveyed, pointed out that mainland Chinese are rude, and lack social etiquette and education.

However, a new generation of Chinese tourists who are opting out of tour packages in search of more authentic experiences is doing what it can to subvert the stereotype.

This demographic is of particular interest to developing destinations such as Laos, which welcomed 639,000 Chinese visitors in 2017, according to and where tourism officials and local residents alike are hopeful increasing numbers of visitors will have a positive effect.

Having declared 2018 the year to Visit Laos, authorities are working hard to improve infrastructure, much of it with the help of investment from China, which is not always welcomed with open arms.

Of course, there are many horror stories that illustrate the environmental and societal pressures brought to bear by the unfettered growth of tourism on a destination that is not completely prepared for it.

But, with strategic planning, a more sustainable approach and increased local involvement, there have been success stories.

Laos’ own Vang Vieng is a prime example, having overcome a tainted reputation to emerge as a destination popular with travellers from China and South Korea in search of a very different experience to that of the backpackers who came before them.

And while it may not be reaping quite the economic rewards it was at peak party time, Vang Vieng is now doing its thing with an eco-tourism tagline and without the heavy loss of life.