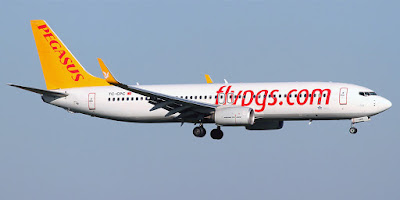 The Authority today approved the operation of Turkish budget airline Pegasus Airlines for four weekly flights between Muscat and Sabiha Airport in Istanbul as of 4 July, 2018, PACA announced.

The authority added: We hope that the company's flights will provide economically competitive options for travel between the Sultanate and the airline's destinations.

Pegasus Airlines is a Turkish low-cost airline headquartered in the Kurtkoy area of Pendik, Istanbul with bases at several Turkish airports.

In Greek mythology, Pegasus was a winged horse sired by Poseidon, in his role as horse-god, and foaled by the Gorgon Medusa. However, four months after the launch, Iraq invaded Kuwait and the seven month occupation that followed had a serious effect on Turkish tourism.

By 1992, tourists began returning to the country and Pegasus grew with the acquisition of a third 737-400. The airline leased a further two Airbus A320s to meet the summer demand.

After two positive years, Aer Lingus and Net sold their shares in the company in 1994 to Istanbul-based Yapi Kredibank, making Pegasus a purely Turkish company.

On 4 September 1997, Pegasus placed an order for one 737-400 and one 737–800 from Boeing Commercial Airplanes making it the first Turkish carrier to place an order for the Boeing 737 Next Generation. The airline also signed lease agreements for a further 10 737-800s from the ILFC.

In January 2005, ESAS Holdings purchased Pegasus Airlines and placed Ali Sabanci as the chairman. Two months later, he changed the airline from a charter airline, to a low-cost airline.

In 2012, Pegasus Airlines, the second largest airline in Turkey, has signed for up to 100 A320neo Family aircraft (57 A320neo and 18 A321neo models), of which 75 are firm orders. Pegasus becomes a new Airbus customer and the first Turkish airline to order the A320neo.

This was the largest single commercial aircraft order ever placed by an airline in Turkey at that time, and was announced on December 18, 2012 at a ceremony attended by Binali Yıldırım, the Turkish Minister of Transport.

The company offered 34.5% of its shares of stock to the public. The shares began to be traded at the Borsa Istanbul as BİST: PGSUS on 26 April 2013.

In October 2016, Pegasus Airlines announced to offer three of its aircraft on the ACMI and leasing markets, stating severely decreasing passenger numbers.