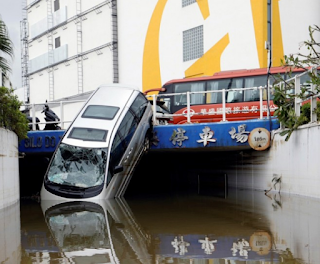 Macau Meteorological and Geophysical Bureau which failed to predict the ferocity with which deadly Typhoon Hato would hit the gaming hub may have held off raising the highest storm warning because of the financial impact on the city’s casinos.

As the clean-up continues after Hato ripped through the former Portuguese enclave, killing 10 people, injuring scores more and leaving more than half the city without water and electricity, sources with knowledge of the government’s civic protection plans said the casino factor, real or perceived almost certainly played a part in the delay raising the alarm.

A recent reorganisation of the city’s emergency services to deal with such events may also have contributed to the chaos and loss of life, the sources said.

The aftermath of Hato has already led to the resignation of Fong Soi-kun, the head of the Meteorological and Geophysical Bureau, and raised questions over how a city awash with gaming riches, giving it one of the highest per capita gross domestic products in the world was not properly prepared.

Faced with the scale of the post-storm clean-up and inability of the Macau government to cope, soldiers from the city’s People’s Liberation Army garrison had to make an unprecedented departure from their barracks on Friday to tackle Hato’s chaotic aftermath.

From the time the typhoon No 8 signal is hoisted, casinos are mandated to pay all staff overtime. While this might well be something the bigger operators can cope with, for the smaller casino sub-concessions it is a different matter.

There need not be any direct, overt pressure as such, but there can be no doubt the casino factor plays into the thinking of those charged with making storm signal decisions, the source added.

Tens of thousands of people, from executives and croupiers to pit bosses and ancillary staff, are employed in the city’s gaming industry, which has exploded over the past 15 years, making Macau the world’s most cash-rich gambling centre.

The meteorological bureau first came under fire in August last year, after it failed to raise the No 8 signal when Typhoon Nida struck the city.

The criticism continued this week after the bureau predicted that a maximum wind speed of 118km/h was expected for Typhoon Hato, but only raised the No 3 warning at around 3am on Wednesday.

The No 8 signal was eventually raised on Wednesday morning about nine hours after Hong Kong issued the same signal.

It indicates wind speeds ranging from 63km/h to 117km/h are expected, and gusts reaching about 180km/h.

A No 10 signal was issued shortly before noon, too late for residents already on their way to work.

The government cannot handle the challenge in the way people expect from a self-claimed first-class city.

Therefore, what about the Casino funds?

Macau’s major casinos and hotels, still reeling from the city’s estimated US$216 million in economic losses caused by Typhoon Hato, are offering heavy discounts on room rates and fine dining, as they struggle to regain business.

Tropical Storm Pakhar, making landfall on Sunday 80km away in Taishan, added to the mess that Macau must clean up and weighed on the city’s financial woes, even though no fatalities were reported in the second severe storm endured by the former Portuguese enclave in less than a week.

Pakhar, with gale-force winds triggering a No 8 typhoon signal, set back the clean-up efforts by the People’s Liberation Army, which deployed 1,000 soldiers on Friday to help remove debris strewn across some heavily flooded districts in Hato’s wake.

Several major casinos and hotels claimed that their businesses had resumed largely unscathed and visitors were starting to return, even as electricity and water supplies remained unstable, forcing some restaurants to stay closed.

The casino has reopened and is running normally now, a front desk employee at the MGM Macau said. Electricity and water supplies have also resumed. But for the meantime, restaurants are not yet opened.

The Parisian’s casino had also resumed business, but electricity and water supplies were unstable. The hotel had stopped accepting reservations until September 1, a staff member said.

Hato ripped through Macau last Wednesday, claiming at least 10 lives and injuring at 240 more, leaving over half the city without water and electricity.

The city’s gaming sector, which has made Macau the world’s premier gambling hub, was hard hit, with many casinos forced to shutter by flooding or blackouts.

Daily casino revenues could average around 828 million patacas in August, according to an estimate by Japanese brokerage Nomura, which slashed its growth forecast by 6 percentage points to 19 per cent for the month, after Hato struck.

There was a two-day shutdown of casinos and hotels forced by Hato.About 150,000 people work in the hotels and gaming-related sectors in Macau, accounting for roughly 40 per cent of the city’s workforce.

Hato hit during the peak season for hotels and casinos,said a local leader at the labour advocacy group Forefront of Macau Gaming and director of the gaming guild New Macau Association.

Hotels and casinos were planning big promotions in September to attract guests.

The city’s casino magnates have come out in force to donate funds toward the city’s clean up and reconstruction. Galaxy’s founder Lui Che-woo committed 60 million patacas from his company and family foundation.

Pansy and Lawrence Ho, children of tycoon Stanley Ho Hung-sun, also pledged a combined 60 million patacas from their MGM, MGM China and Melco Resoirts & Entertainment towards relief work. About 500 volunteers at Melco also joined efforts to clean up the city.

More pressing for gambling operators was the brewing grievance among staff,some hotels asked their workers to volunteer to help with the clean-up.

There are complaints that employees were forced to go to work by taking taxis during typhoons but were told they would not be reimbursed.

Macau’s labour laws do not cover employees during typhoons or inclement weather.

According to guidelines by the Macau Labour Affairs Bureau, employers should not require staff to report for duty when the No 8 typhoon signal is in force, except in cases where employees performance of work is indispensible to the normal operation of the society, or prior agreement to the contrary has been made by both parties.