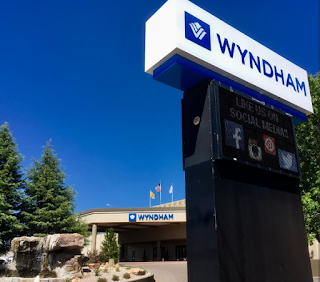 Wyndham Hotel and Conference Center is the new name of the former Hotel Cascada. The hotel's rebranding is now official, complete with new signs.

The hotel, 2500 Carlisle Blvd. NE, underwent a $5 million renovation, which includes a new fitness center, new exterior painting, an updated lobby and upgrades to the Altitude Sports Grill and the hotel’s guest rooms, according to a news release.

The hotel said the fitness center will be the largest of its kind in Albuquerque.

The entrance to the on-site water park was also renovated and a new sauna was added.

The hotel's Amped Café has been revamped and is now The Manzanita Grill and will feature American and regional cuisine.

In January, Peak Hospitality, an Albuquerque-based hotel management company, said it would oversee the renovation and will manage the hotel.

Peak's aim: to transform the hotel into a must-visit destination for both travelers and locals.

Wyndham and Peak will be unveiling the updated property during a private event in mid-September.

The property underwent a rebranding and a $5 million renovation in 2013. In December 2015, the waterpark made USA Today 10Best 's top 10"hotels for water fun in the winter."