CHINA: Why Do Foreign Visitors Ignore China? Yet More Chinese Are Touring The World 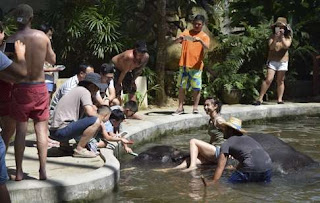 Visitors from China may have become the biggest contributors to the global tourism market, but the Asian giant with a 5,000-year history apparently is not that attractive to foreign travellers.

The number of inbound tourists grew at an average annual rate of just 1 per cent between 2005 and 2015 – and eight out of 10 of those were from Hong Kong, Macau and Taiwan, according to a report by a Beijing think tank.

The rate trails that of both developed countries and other emerging economies, the Centre for China and Globalisation (CCG) report said. It’s also far behind the average for the Asia-Pacific region, which saw inbound tourist traffic grow by more than 80 per cent in that period.

The National Tourism Administration has blamed the global financial crisis for visitors staying away in the past decade, but last week said the market had entered a new era of steady growth.

It posted a trade surplus of US$10.2 billion in tourism revenue for 2016 – meaning inbound spending exceeded outbound spending.
But those figures are less convincing without visitor revenue from Hong Kong, Macau and Taiwan.

Excluding visitors from those three places, the researchers found that, based on official data, Chinese tourists made 30 million more trips abroad than foreigners made to China in 2015. Those numbers remained largely unchanged last year.

Take away the three areas, and there was a big number of foreign tourists who were actually Chinese nationals living abroad. So the number of foreign visitors was really small, which is inconsistent with China’s growth in general.

More than 60 per cent of foreign tourists visiting mainland China are from Asia – mainly from South Korea and Japan, the report said.

Beijing-based tourism researcher Liu Simin said the appreciation of the yuan before 2016 had affected the market, but it was also struggling to compete with well-established holiday spots in Asia.

Popular tourist destinations in Asia such as Thailand provide better service and are often better advertised.

Foreigners may have put off travelling to China because of its reputation for polluted air and food safety problems.
Visitors are afraid of three things: the air pollution, the water pollution and the food.

Other Asian countries might be more appealing travel destinations for foreigners,Japan for example, has the reputation of being cool. When people think of Japan, they think of hi-tech, and Korea too. China seems more foreign, more scary.

Foreigners tend not to think of China as a holiday destination. China has always been reported as being dirty, polluted, not very nice people, suspicious foods, language problems.

Because of internet restrictions, viz. a lack of advertising, China doesn’t get the coverage like other Southeast Asian countries and therefore potential visitors continue to believe that China is only about the bad and the only tourist attraction is the Great Wall.

Visa policies are another a barrier. Although visa-free transit stays have been introduced in some cities, and Hainan Island offers tourist visas on arrival, strict policies otherwise apply.

China also had the world’s lowest percentage of foreign students. Of its 35 million university students, some 200,000 or less than 1 per cent were foreign. The number of long-term foreign residents, including students, was also low at about 800,000.

Meanwhile, many local travel agents were focused on outbound services as the growing middle class head overseas in greater numbers.

All the agents need to do is send people to these places, whereas it takes a lot more money and effort and earns less to receive foreign tourists.

But some in the industry are trying to lure more foreign tourist dollars. Ctrip, China’s largest online travel agency, recently teamed up with the Confucius Institute Headquarters, a government organisation providing language and cultural teaching services in foreign countries to generate more interest from overseas.

Zhu Lei, who heads strategic cooperation at Ctrip’s international business unit, said China should be attracting more foreigners because of its rich history and culture, but also for other reasons including its steady currency and visa-free transit stays in some cities.

He said Beijing’s belt and road trade plan was also a chance to attract more foreign tourists. Guided by that initiative, local governments are now targeting Russia, eastern and central Europe and South Asia for inbound tourism, Zhu said.These regions will be the source of more visitors to China.

About 133 million tourists will make outbound trips by the end of 2016, according to the report released by the China Tourism Academy and the financial services company UnionPay International.

Hong Kong, Macau and Taiwan remain the top choices for mainland tourists, according to the report.They are followed by Thailand, South Korea and Japan.

Chinese tourists are increasingly getting involved in leisure activities and learning about local lifestyles when travelling overseas rather than just shopping, according to the report.

Chinese tourists spent US$104.5 billion overseas last year, up 16.6 per cent on 2014, and a growing number of foreign countries are relaxing their visa requirements for Chinese tourists to tap their purchasing power.

A survey conducted by HSBC last month has also suggested that there is huge growth potential catering for Chinese tourists overseas.
HSBC estimates that the number of outbound trips from China will double over the next 10 years.

While more than two-thirds of the panel respondents were passport holders, far fewer have made trips abroad. It seems we are just at the beginning, said Erwan Rambourg, a head of consumer and retail research at HSBC.